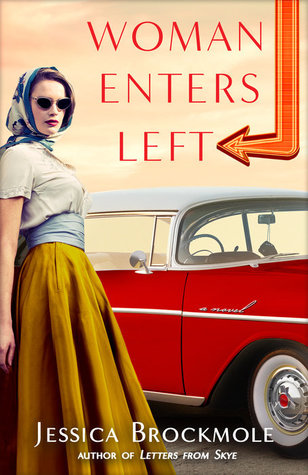 Letters From Skye by Jessica Brockmole is one of my favorite reads in recent years and of course At The Edge of Summer was also a stunning read, so I was exceptionally eager to read her latest book Woman Enters Left. Needless to say I had high expectations.

I personally think that Brockmole is at her best when she is writing a romance, but this book sounded intriguing and was told in journal form (which I love) so I was eager to see how it unfolded.

In the 1950s, movie star Louise Wilde is caught between an unfulfilling acting career and a shaky marriage when she receives an out-of-the-blue phone call: She has inherited the estate of Florence “Florrie” Daniels, a Hollywood screenwriter she barely recalls meeting.

Among Florrie’s possessions are several unproduced screenplays, personal journals, and—inexplicably—old photographs of Louise’s mother, Ethel. On an impulse, Louise leaves a film shoot in Las Vegas and sets off for her father’s house on the East Coast, hoping for answers about the curious inheritance and, perhaps, about her own troubled marriage.

Nearly thirty years earlier, Florrie takes off on an adventure of her own, driving her Model T westward from New Jersey in pursuit of broader horizons. She has the promise of a Hollywood job and, in the passenger seat, Ethel, her best friend since childhood. Florrie will do anything for Ethel, who is desperate to reach Nevada in time to reconcile with her husband and reunite with her daughter. Ethel fears the loss of her marriage; Florrie, with long-held secrets confided only in her journal, fears its survival.

In parallel tales, the three women—Louise, Florrie, Ethel—discover that not all journeys follow a map. As they rediscover their carefree selves on the road, they learn that sometimes the paths we follow are shaped more by our traveling companions than by our destinations (summary from Goodreads).

This novel had a different ton than some of her others, not just the time period but also the content. This book focused more on friendship than romance which I was a little disappointed about because I just love how Brockmole writes romance. However, I loved the ‘open road’ concept which helped fill in some of the missing ‘romance’ for me.

Who doesn’t love a road trip? The open road with no maps? Where will life take you next? I love this concept and in this book it really shined. Brockmole makes the open road sound so romantic and intriguing. It almost makes me want to just up and start driving wherever the road will take me! I love how she capitalized on this concept and I thought it worked well within the novel.

I also enjoyed the characters. Because the book is written via letters/journals, it really allows the reader to connect with each character on such an intimate and personal level. This narrative style is Brockmole’s bread and butter. She is at her best in this form. I love how quickly the book read and the stories each moved thanks in no small part to this narrative style. It was hard to not read ‘just one more chapter’ every time an entry finished.

While I still think I like her other two books better, this isn’t a bad novel by any means! The story is timeless and will appeal to readers from many walks of life. It’s fast paced and romantic in it’s own way. If you love epistolary novels, then you can find no better than Brockmole’s books!

Be sure to check out the other stops on the tour hosted by Historical Fiction Virtual Book Tours for chanced to win a copy of the book, author interviews, and other reviews!

Friday, September 8
Feature at Passages to the Past

Monday, September 11
Review at So Many Books, So Little Time

Wednesday, September 13
Feature at To Read, Or Not to Read

Wednesday, September 27
Feature at Books of All Kinds

Friday, September 29
Review at The Lit Bitch
Interview at Jorie Loves a Story

Monday, October 2
Review at What Cathy Read Next
Review at CelticLady’s Reviews