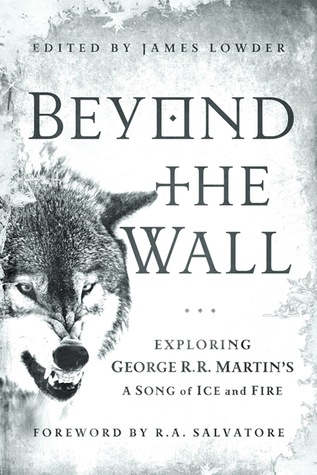 After recently re-reading A Game of Thrones, I couldn’t help but crave more of the epic story!

I’ve read all the books at least once and after this recent re-read I’ve been scouring the discussion forums for more theories and insight into A Song of Ice and Fire.

So needless to say, reading this book was a no brainer. I’ve read a lot of reviews about this anthology, and most people say that you can find better material online in the discussion groups for free.

While there is a plethora of material online, a lot of it isn’t structured or supported by research which was what I was looking for….something a little more organized.

This novel had a broad selection of essays about A Song of Ice and Fire and Westeros. Some were interesting and thought provoking while others left me wanting.

Some of the essays I could have done without were Adapting A Game of Thrones as a Graphic Novel and Collecting Ice and Fire in the Age of Nook and Kindle.

What was unclear to me was if this collections of essays was meant to be more academic driven or more personal opinion and speculation. Some of the essays had supporting evidence from outside sources while others were more conjecture or the only support evidence were from the text alone.

At the end of the day I tried not to be too hard on the essayists and took what I was reading at face value.

One thing that I noticed with a lot of the essays were the reference to the same key scenes within the series. Most of the papers cited the discovery of the direwolves as the catalyst for the novels. I agree this is an important foreshadowing event, but I think there were lots of other references throughout the novels that the writers could also have drawn.

Some of my favorite essays were Of Direwolves and Gods, A Sword Without a Hilt, and Power and Feminism in Westeros. I was hoping for more essays on these topics…..magic and feminism.

I had hoped the essays would be longer with more support evidence from the texts however, I think that could easily gotten out of hand and exceptionally long. So all in all I though the length of the essays were appropriate–long enough to present and support thesis statements but not so long as to put the reader to sleep.

There was so much material cited from A Game of Thrones and A Dance with Dragons that I was a little disappointed because there is so much to tap into within the other texts that I felt would have been useful within each paper….but again that’s stylistic preference.

I’m an English major and as such focus on academically driven papers so perhaps I am bias when it comes to things like this.

I think my biggest issue with this book, was I wanted more essays! I wanted to read more about what academics or professionals in the genre thought about the series and theories they might have.

Over all though, this is a nice selection of topics that aren’t dry or overly intimidating. The material is straight forward and interesting. Some were enlightening and made me see different characters in new ways–Art Imitates War, Post-Traumatic Stress Disorder in A Song of Ice and Fire–was particularly interesting.

If you are a fan of the novels, then I think this is a nice orderly book in which various opinions are presented in an academic fashion. While you can get more tantalizing theories and discussions online, often they are not as well researched or presented as they are here in books such as this.

Book: Beyond the Wall: Exploring George R.R. Martin’s A Song of Ice and Fire by James Lowder