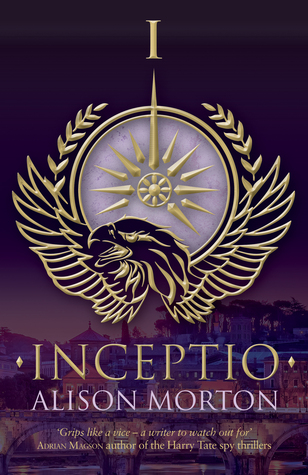 Karen Brown leads an unassuming life. She grew up in rural Nebraska and moved to New York where she continues living a quiet life.

She works in a cubicle with no major responsibilities. She isn’t seeing anyone special, and like most young women on their own, she’s barely making ends meet.

But all that is about to change, in a big way.

When she starts working on a new account for a Roma Nova organization, she has no idea they are actually there surveying her. She soon learns that her mother, a fellow Roma Novan, made arrangements for her to be rather well off.

But as the saying goes, more money, more problems….someone wants her to disappear.

Fearing for her life, Karen and her newly discovered Roma Novan family encourage her to renounce her citizenship and move to Roma Nova permanently where they can protect her.

But the safety of her new world is soon threatened by a man known as Renschman who is hunting her down relentlessly.

This is where the novel hooked me: who was this man who wanted to kill her? What is his beef with her? Is there a personal history between him and her family? Who what when where why how?

I liked how the novel started out with this ominous villain, Renschman and progressed from there to develop into a full fledged thriller. I liked how we met him right away as the foundation was being put in place for the rest of the novel.

The novel as a whole was completely unique. I loved the alternative setting for the United States and the country of Rome Nova. It was fun to see history come alive in a different way–it made me really think about what the world would be like if things in history has ended up differently. I love novels that make me think in those terms.

It was nice that she didn’t get too involved in the history or history building part of the story too much in the first novel. She gave us enough to get the ball rolling but not so much that there was nothing to look forward to discovering in the next book.

There was one down side to not overly indulging the reader though–I loved how the novel combined both past and future politics, geography, and history, but I did wish we had seen how the different countries and politics all worked together. We saw a lot of the Roma Novans and their politics etc, but I would have liked to see how the other countries did things etc.

As for the characters in the novel–Karen has the worst luck in the world. I can’t help but sympathize with characters like that. Who doesn’t love an underdog or a come back kid character. I also enjoyed the secondary characters–Conrad was sexy and mysterious. I liked seeing his character unfold.

The romance between Karen and Conrad was also tasteful and well done. I liked that it wasn’t the entire focus of the novel. At the same time, the romance didn’t seem like it was thrown in for effect….it contributed the the story and broke up the plot nicely.

The plot was fast paced. I liked how the chapters weren’t excessively long. With each chapter I felt like the story was progressing and nothing was thrown in for fluff–every bit of the plot mattered which made it advance steadily.

Though this is a series, this book wrapped up all loose ends rather than leaving too much opened ended for the next book. That seems to be a trend with most series books which can sometimes be really frustrating as I find it often leaves the book feeling ‘unfinished’ and I often feel less satisfied with the read when that happens. This book was not like that. Things got wrapped up and the next book should be a fresh extension of the story rather than just a continuation.

If you are looking for an entirely different twist on history, then this is a great novel to start with.  I am looking forward to the next book in the series for sure!