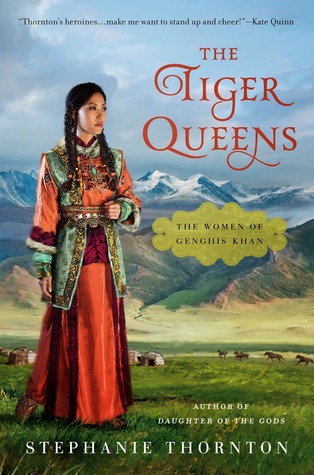 Genghis Khan was one of antiquities most notorious and feared leaders. The Mongol empire grew exponentially under his reign but behind every fearless leader, there is often a woman pushing him to be better.

This is the story of the women who made Genghis Khan’s empire what it was. It begins with the story of Borte, his queen. Borte’s future has been foretold by her seer mother and it doesn’t look good.

She will come between two brothers and will bring war and destruction to her people because of it. But true to her promise to marry the man who would be come Genghis Khan, she endures the prophecy with as much dignity as she can.

She survives unimaginable horrors in a brutal land where violence and the threat of kidnapping and rape are a daily reality. She emerges stronger with a fire all her own. She gives Genghis sons who will eventually succeed him, but it’s her daughter, Alaqai, that will prove to be the strongest of her children.

Alaqai, like her father, was born with a blood clot in her hand. It is said that blood clot was a sign of great strength. She was also conceived during a time of great unrest and warm within her tribe, so it is also said that she is the born from death and destruction. Ominous to say the least!

The other two portions of the book follow the lives of Fatima who is a Persian captive who must learn to survive among the barbarian tribe as well as the story of Sorkhokhtani, who is Genghis Kahn’s daughter-in-law. She will play an intricate role in the development of his legacy.

This book was on my radar for a long time. I was introduced to Thornton’s writing with her first novel The Secret History about Empress Theodora. Her writing and research was solid and captivating, but it was her second novel, Daughter of the Gods,  that cemented her in my mind as one of my favorite novelists.

Thornton’s hallmark is writing about both famous and obscure women in antiquity….women that you may or may not have heard of but who have powerful stories. I love that she has discovered an untapped market in historical fiction. There are shelves of books on the Tudors but not many on the Queens of Genghis Kahn!

This book was my favorite so far. Though I worried about the four different POVs in the narrative, it wasn’t at all distracting or confusing. In fact it made the novel go much faster with the new stories and characters. The only down side was I didn’t feel as invested in the characters at time.

I personally liked Borte and Alaqai’s stories the best, and just as I was beginning to feel strongly for them….their story would end and we would have a new heroine to get to know and fall in love with. Though this was a little frustrating and it was a different approach than Thornton normally takes, I think it worked because in Mongol society, multiple women and wives were normal and how best to illustrate the power and influence of these different women then by having multiple female POVs.

As always, I am deeply impressed with Thornton’s historical research abilities. I mean WOW…..she is all over the globe when it comes to finding unique women in ancient history! It’s completely mind-blowing how much research she does. All the women in her tales are completely bad ass….I wish I could meet them!

All the little linguistic details, the history, the politics, the landscape….she really focuses on the details of the story and that shines through in her work. It brings authenticity to her stories….history and fiction blur magically. And the best part, is there is just enough romance to satisfy readers who like a little love along with their historic fiction.

Besides the rich and textured research and history of her novels, Thornton’s writing style is approachable. It’s not overly academic or dry. She writes with a vibrant pen making the characters pop and modern. I never feel intimidated to read one of her stories.

I know next to nothing about Genghis Kahn. I barely know anything about the Mongol empire….nor do I have a real interest in that region but her books make me excited to learn about the ancient world!

Now that I’ve read three of her novels, I am excited to see where she takes us next and what woman we get to read about. I am hoping maybe a middle eastern princess like Dido….maybe even into Africa with the Queen of Sheba. Some place exotic and mysterious would satisfy me!

One final note….another stunning cover! Her covers are always inviting and tease the reader with bright colors and clearly strong, intriguing women on the front. The covers are eye catching and alluring.

If you haven’t discovered this author yet you need to! She has a flair for capturing unique stories about women in history that you would normally overlook!

Book: The Tiger Queens: The Women of Genghis Kahn by Stephanie Thornton

Monday, November 3
Review at Oh, for the Hook of a Book

Thursday, November 6
Review at The Mad Reviewer
Review & Giveaway at Peeking Between the Pages

Tuesday, November 11
Review at With Her Nose Stuck in a Book
Review & Giveaway at Book Lovers Paradise

Wednesday, November 26
Review at WTF Are You Reading?

3 thoughts on “Review: The Tiger Queens: The Women of Genghis Khan by Stephanie Thornton”