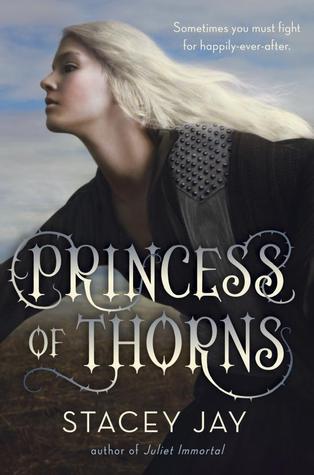 I am excited to see all the fairy tale retellings out there, especially for Sleeping Beauty as Aurora is one of my favorite princesses.

Princess of Thorns is a different kind of fairy tale retelling. Princess Aurora AKA Ror is actually a warrior princess and Sleeping Beauty’s daughter who must fight to regain her throne. ‘

As a briar born child, Ror and her twin brother Jor have been gifted special powers. Jor has been kidnapped by the evil ogre queen and is being tortured.

Ror is the heiress to the fairy lands and she must not only save her brother, but she must regain her kingdom by any means necessary. She knows she will never marry because any boy she kisses turns into a mindless minion so she must do all this by herself. Dressed as a boy she plans on first saving her brother. Enter Niklass.

Niklass is a prince with a curse all of his own. He will turn into a swan on his 18th birthday unless he finds a princess to marry with her own lands. Aurora is his last hope. When he meets Ror he thinks he has the fairy brother and Ror will take him to Princess Aurora.

Ror is more than happy to let Niklass think she is her brother….less complication for her. However she must still rescue her real brother and without Niklass knowing he has what his heart desires most already in his grasp.

Ror and Niklass must navigate dangerous miles of forest watched by the ogre queen and her dark creatures while fighting the growing feelings between them.

This book started out off for me. I don’t know if it was the dialogue but something about it just didn’t fit. For me the dialogue was rather juvenile at times….so much so that I wondered if this was a middle grade book rather than YA. It wasn’t horrible but it wasn’t snappy and engaging either.

And ogres? I guess in the end it worked but in the beginning I was like am I really reading a story about ogres right now?  In the end that angle worked ok but it wasn’t what I was expecting….I was expecting an evil queen with magical powers not an ogre queen….it was just strange overall. It satisfied a role but it wasn’t quite what I would have expected.

The queen story line was WAY under developed for me. There was such a focus on the romance between Ror and Niklass that the evil queen took a back seat and at times I forgot they were even in any danger.

The mystical world also needed work. As a high fantasy, magical world….I was expecting the author to elaborate more and build it up more or at the very least have the characters interact with the world more….I found that aspect wanting as well.

Then came the romance between Niklass and Ror…..initially I was worried. But Niklass saved the book for me. I really liked his character. He was charming, funny, and sharp. Reading from his perspective was fun.

Initially I worried about the two different narrators (the chapters with the third POV could have been done without) but it wasn’t too bad. I liked Niklass and thought he has a strong voice in the narrative.

As the story went on, I found myself forgetting about what wasn’t working and shifting my focus to what was working. Ror and Niklass weren’t an overly annoying couple and I enjoyed watching them face trials and tribulations together and thought they were both flawed and it was fun to see them grow together. Though they were stubborn, together they worked.

While this novel was somewhat of a disappointment to me, it wasn’t a total loss. There were things to enjoy about it such as the characters and their romance. As the novel went on the dialogue got better and there were some funny moments but overall this novel was just ok for me. I would probably read the next book in the series but I wouldn’t move it up to a top place or a priority on my TBR list.

The only thing scarier than feeling so alone is fearing you’ll always feel that way, that no one will ever see you for all the things you are, and the things you’re afraid to be, and the person you want so desperately to become.