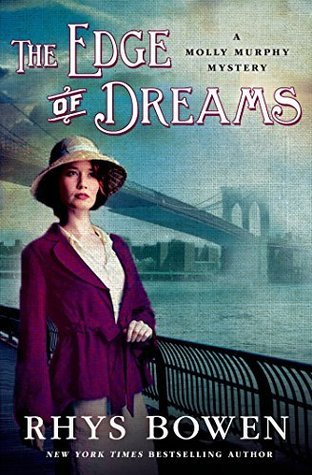 For years my mother has been trying to get me to read Rhys Bowen’s books. I have literally received Her Royal Spyness in the mail at least three times now.

Here’s why I haven’t picked up any of Bowen’s books….there are so many book series out there with a female detective set around the same time that how different could it really be? What distinguishes Bowen’s heroines from the others?

OK so maybe mother does know best….mother you were right, I should have picked up Bowen’s books a long time ago!

When The Edge of Dreams came up for review, I knew I would be starting the Molly Murphy series in the middle. But I thought I would give it a try anyway since I’m in love with the cover and have been craving a good mystery.

The author does a fantastic job orientating the reader within the story. I didn’t feel lost in the series what-so-ever. There was clearly a back story and events in previous books obviously shaped this book but you don’t have to read the others first in order to read this book, which I loved.

The author starts right in with the action and mystery and every event that happens after propels the story forward. I don’t know if ‘fast paced’ really describes this accurately….I would say it was more of a progressive mystery. It was steady and held my interest.

I was intrigued by the mystery itself and enjoyed watching the clues come together. I loved how Molly’s mind worked out the clues. She had a knack for seeing the logic in the clues but not in an know it all kind of way. It was more that she was looking at things with a fresh pair of eyes and pointing out what was missing. I loved that about her character.

So the premise for the mystery is Molly’s husband Daniel, also a police officer, has been receiving cryptic notes about multiple murders for months. There is nothing connecting the murders together except the notes.

After receiving the last note, Molly and her son Liam, are involved in a terrible subway crash. After the crash, Daniel receives another note implying that the target of the crash had been his wife.

Knowing that his wife is in danger, Daniel discourages her from getting involved in the case but how can she sit back idly and wait for a killer to find her? Not to mention she has been having strange dreams that might hold the key to solving Daniel’s case.

It’s no secret that I love detective novels with a female detective as the main character. I’ve read plenty of books fitting that description. So back to my original question, what makes Molly different from the rest?

Well first of all, I love that this novel was set in New York. While I hold England near and dear to my heart, I think that it’s nice to have a change of venue in this case.

Second, Molly is spunky but not in a know it all kind of way. She isn’t so overly head strong that it’s annoying. She is practical and though she has a fiery spirit, it doesn’t dominate her.

She’s a wife and a mother but still trying to maintain her independence as a detective which I liked. She seemed real….trying to balance all these different roles can be a challenge but Molly meets them head on.

The only thing that I could have done without in this mystery was the interpretation of dreams bit. It seemed like it was thrown in more for effect. I think the mystery could have been solved without that bit. However I liked that the author incorporated what was happening historically at the time which was the science of dreams.

On the whole, I’m thrilled to have found another great series featuring a female detective. I am excited to read more by Bowen….and yes mother I will pick up Her Royal Spyness now!

5 thoughts on “Review: The Edge of Dreams (Molly Murphy Mysteries #14) by Rhys Bowen”