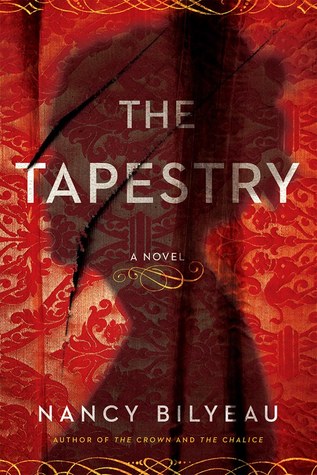 Joanna Stafford is still struggling to adjust to life in the sleepy town of Dartford.

Once a novice nun, but now….not, thanks to King Henry VIII, Joanna is content weaving her tapestries at her home.

The sudden disappearance of her would be husband, Edmund Scovill, has left Joanna upset and confused (not to mention the reader!) but she is resolved to continue her work on her tapestries far from the English court.

Well, her weaving has caught the attention of the King. When a royal summons from Whitehall comes, demanding Joanna’s presence at court, she can hardly refuse the royal order.

When she arrives at court, she is literally attacked instantly by an unknown assailant. It becomes clear that someone wants her dead and the attacked was a carefully orchestrated by a trained assassin.

After being rescued by Thomas Culpeper, Joanna is escorted to her long time friend, Catherine Howard. But something is amiss. Catherine was once a maid to the Queen, but now she has her own household and servants. Something has changed with Catherine’s status at court.

It soon becomes clear that King Henry desires Catherine has his next mistress. Joanna hopes she can save her friend from ruin and disgrace but there are other powerful courtiers that influence Catherine to go along with their council.

Joanna is in a world completely out of her element and she has come to a dangerous place. She is not a courtier, unfamiliar with the politics, and she has her own problems to worry about…..like who is trying to kill her.

In a world of feasts, banquets, opulence, and treachery, Joanna must try to stay alive and save those closest to her, while facing an unknown adversary!

I really enjoyed the previous book in the series, The Chalice. I have yet to read The Crown, but I have heard good things about it as well. I would say that you could probably read this book without having read the previous books in the series. I didn’t feel like there were huge gaps in the plot, plus Bilyeau does a great job at explaining the characters and plot back story to readers.

As I said in the previous book, I thought that Joanna’s character was constructed well and fit within the historic period. She never did things that were overtly out of character and she wasn’t overly head strong which fit within the period. She was obviously devoted to her faith and always concerned herself with the morally right question, especially when it came to her friend Catherine.

I am still struggling to connect with her though. While I really liked her and thought her character unique and likable, I never really connected with her in the way that I was expecting. I said the same thing in the last book, and at that time I thought maybe it was because I hadn’t read the first book in the series, and while it could be, there is just something about Joanna that I am not connecting with in the way that I had hoped.

However, I did like her well enough and connected enough with her to care about what happened next and to want to keep reading her story.

The story itself and exciting and full of adventure! Sometimes it’s hard to keep all the politics straight, especially with the characters. But overall, the plot is full of intrigue and mystery! I liked that this book started off right away with the adventure rather than spending a lot of time recapping what happened in the previous book.

It’s very clear that Bilyeau loves the Tudor period. She does a marvelous job peppering the novel with  famous historic figures throughout the novel. I thought this showed a true love of the period on the authors part, for me it brought a lot of authenticity to the novel as a whole

This novel has a lot to love…..and for that matter so does this series! The premise is unique and offers and interesting perspective, especially with Joanna’s character. most Tudor England novels cast the heroine as a courtier or lady in waiting, I love that Joanna isn’t one of those but rather a novice. I thought that brought a fresh perspective on a popular genre.

Overall this novel is a solid work of historic fiction set in Tudor England. It has a well constructed unique plot with an equally unique heroine.

Please check out other stops on the tour for author interviews, giveaways, and guest posts as well as a number of other reviews! The schedule is listed below! There is also a tour wide giveaway happening! For details please see the end of this post!

Monday, March 16
Review at Peeking Between the Pages
Review & Interview at Words and Peace

Tuesday, March 17
Review at A Bookish Affair
Review at The Eclectic Reader
Review at Let Them Read Books

Wednesday, March 18
Review at Writing the Renaissance
Review at Oh, For the Hook of a Book

Thursday, March 19
Review at A Book Geek
Review & Interview at Tea at Trianon
Interview at Writing the Renaissance

Wednesday, March 25
Review at Luxury Reading
Guest Post at Oh, For the Hook of a Book

Wednesday, April 1
Review at Library of Clean Reads
Interview at Oh, For the Hook of a Book

To enter to win one of three signed hardcover copies of The Tapestry, please complete the giveaway form below.

Giveaway starts on March 16th at 12:01am EST and ends at 11:59pm EST on April 3rd.
Giveaway is open to residents in North American and the UK.
You must be 18 or older to enter.
Winners will be chosen via GLEAM on April 4th and notified via email.
Winners have 48 hours to claim prize or new winner is chosen.
Please email Amy @ hfvirtualbooktours@gmail.com with any questions.

One thought on “Review: The Tapestry (Joanna Stafford #3) by Nancy Bilyeau”