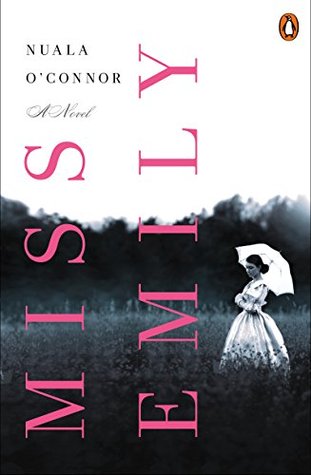 Emily Dickinson is one of America’s most beloved poets. But who was the woman behind all that passion and genius? This book offers a glimpse (albeit a fictional glimpse) into the life of Emily and her life as a recluse in Amherst, Massachusetts.

The story alternates between Emily’s POV and that of her new Irish maid, Ada. Ada has left her family in Ireland in favor of seeking employment in a prosperous new world. When she lands her job at the Dickinson residence as a’ maid of all’, she knows she is fortunate to be in with such a well to do family.

Emily and Ada quickly hit things off and develop a mutual respect for each other. As Emily becomes more and more reclusive, she starts living vicariously through Ada. Though separated by their social standings these two women find a mutual friendship that is both beautiful and compelling.

I wasn’t exactly sure what to expect from this novel…..I was thinking it would be more about Emily and her life and less about the maid and the bonds of female friendship/companionship but I was pleasantly surprised with this new perspective.

I think O’Connor did a wonderful job realizing the relationship between the two women. I loved that she didn’t shy away from gender norms and alternative lifestyles. It was very clear in the narrative that Emily was in love with her sister in-law and I thought that was a very intriguing aspect of the novel and daring as well.

O’Connor really researched this novel. I kept having to remind myself that it was a fictional novel because so much of what she wrote seemed so real and plausible. For me personally, I am not a huge poetry fan nor am I a fan of American literature so I know only a handful of Emily Dickinson’s poems and I know next to nothing about her life. So this book was a rare treat for me to dive into because it was a subject I knew little to nothing about. The two characters were well drawn and I felt like I really got to know Emily. I now want to read more about her and her life.

The prose read like a typical 1800’s novel but yet had an air of refreshing modernism about it that made it more readable and engaging. I loved that O’Connor really tried to remain true to the period when it came to prose, it added authenticity to the novel.

The alternating POVs worked well. It made things move along quickly and kept the reader engaged. However, my biggest issue with the novel was that it was too short. The ending was fitting and wrapped up nicely but for some reason I just came away wanting more. I would have liked to have some aspects of the story drawn out a little so that we could spend more time with the main characters.

So do you have to be a fan of Emily Dickinson to read this novel? Not in the least, though I am sure it does make the story that much more rewarding but if, like me, you are getting acquainted with Emily for more or less the first time, then this is a great novel to start with.

There was one thing that was shocking in this book and took me by complete surprise….there is a sexual assault so if that sort of thing bothers you, I would say be prepared. While it didn’t necessarily put me off to the story or anything, I will say it did seem a little much for me but on the other hand, realistic I suppose. In the end it didn’t put me off to the novel at all, and I loved that there was a happy ending in store.

This is a solid read about one of America’s most beloved poets, and if you haven’t had a chance to become acquainted with Miss Emily yet, do not hesitate to pick this up, it’s a quick and easy read about the bonds of friendship.