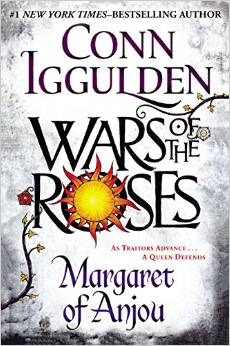 War is coming….or is it winter? This is the book that inspired the wildly popular A Song of Ice and Fire series (AKA Game of Thrones). This latest book in the War of the Roses series was a constant action sequence.

I haven’t read the first book in the series and that did put me at a bit of a disadvantage because I didn’t fully understand the relationships between some of the characters but I do know my British history so it didn’t take too long to get situated in the story.

the year is 1454 and King Henry VI has remained all but exiled in Windsor Castle, struck down by his illness for over a year. His fiercely loyal wife and Queen, Margaret of Anjou, safeguards his interests, and hopes that one day her son Edward will know the love of his father.

Richard Duke of York, Protector of the Realm, extends his influence throughout the kingdom while King Henry struggles with his illness. The Earls of Salisbury and Warwick make up a formidable trinity with Richard, and together they seek to break the support of those who would raise their colors in the name of Henry and his Queen.

But when the King unexpectedly recovers his senses and returns to London to reclaim his throne, the balance of power is once again thrown into turmoil. The clash of the Houses of Lancaster and York will surely mean a war to tear England apart

I absolutely loved this novel. There was so much happening but not so much that it overwhelmed the reader. Something was always happening….a battle, intrigue, plots….there was always something to keep the reader engaged and interested.

There characters and the plot was so well constructed that it was hard to differentiate where history and fiction parted. I especially loved Margaret of Anjou, she was strong and a fighter. She was a fierce queen and I loved that she was unapologetic in her quest for power. Though I wish she was more of a ‘player’ in this book…..she wasn’t necessarily the ‘main character’ and I had hoped she would be more of a ‘heavy hitter’ especially since the novel has her name in the title. I also loved Derry, while he is fictional he adds a lot to the story when it comes to resilience and humor. He was great fun getting to know.

My biggest issue with this book though was I wanted a little more romance. There was basically none in this book and while I don’t think romance is always necessary in ‘knight’ books like this, I do think it adds a little something for women readers. Even the ASOIAF series has some romance to balance out all the battles and war stuff. I had hoped this book would have a little….not a lot, just a hint….of romance, but ultimately the writing was so well done that I still loved it!

The battle scenes, especially the battle at St Albams, was so well written and then throw in the alternating POVs of that battle….superb! I felt like I was there and it really gave the reader a sense of how the field was set up and how the battle was fought. Well done! Clearly well researched!

I loved that the characters weren’t all good or bad, that’s the same thing that I loved about the ASOIAF series…..good or bad are a matter of perspective and with the alternating POVs it forces the reader to face difficult choices and ask what they would do if they were in that characters shoes. That worked so well in this novel.

While there was a lot to love about this book, it was at times dense. It wasn’t a fast read by any means. Especially since I haven’t read the first book, I felt like to took me longer than normal to get orientated in the story and figure out what was going on, but once I got situated then I felt good about how things unfolded. But I did wish that the prose was a little less thick.

If you love ASOIAF, then you will likely love this series as well. Though lacking some of the ‘fantasy’ elements of ASOIAF, readers will be treated to intrigue and an epic fight for power plus some pretty bad ass battle scenes!

Book: War of the Roses: Margaret of Anjou by Conn Iggulden