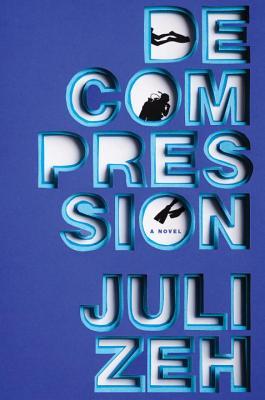 German attorney Sven Fiedler and his girlfriend, Antje, move to the Cayman Islands, where he hopes to escape a culture of materialism. On the Cayman Islands, Sven hopes things will be simpler and more relaxing….less of a rat race, which is exactly what Sven finds. Basically, life couldn’t be better for Sven and Antje.

Sven and Antje open up a diving business and Sven’s approach was simple: take the mechanics of diving seriously, instruct his clients clearly, and stay out of their personal business as best he can. Life is going well for them….until two German tourists–Jola von der Pahlen, a daytime soap star on the verge of cinematic success, and Theo Hast, a stalled novelist–engage Sven for a high-priced, intensive two-week diving experience. The tourists will stay with Sven and Antje in their guest house….but things soon become a little….tense.

Sven is struck by Jola’s beauty, her evident wealth, and her apparently volatile relationship with the much older Theo. Theo quickly leaps to the conclusion that Sven and Jola are having an affair, but, oddly, he seems to facilitate it rather than trying to intervene. Antje, looking on, grows increasingly wary of these particular clients.

A game of delusion, temptation, and manipulation plays out, pointing toward a violent end. But a quiet one, down in the underwater world beneath the waves.

This book was a bit of a chance read for me. I like psychological thrillers but this one just didn’t up and grab me right away as a ‘must read’ for me. But I was between books and looking for something just different….and this sounded like a good option. German writer, modern psychological thriller, about diving, alternating POVs, set in the tropics……sounds about as far from my normal reading as I can get.

I liked the alternating POVs for the most part. The POVs alternated between Sven and Jola’s diary entries. In the beginning most of their stories match up which put me at ease with both of the narrators, but then things started differentiating which was intriguing. I personally found Jola’s diary entries more engaging and enjoyable and I really enjoyed reading from her perspective.

I had trouble connecting with Sven as a narrator at time, but collectively their narration worked well for this type of story. I liked how the more complex the characters got, the more complex the narratives and story got. I thought the mystery/thriller aspect of this novel was decent. There was clearly a game a foot and I wanted to know what it was and why, I felt invested in the plot. This novel is marketed as a psychological thriller, I would say it’s more of a psycho-sexual thriller.

There is some graphic sex in this novel so if that sort of thing offends or bothers you I would not suggest this novel, but I personally didn’t find the sexual content offensive or out of place for the characters themselves.

While I liked the alternating POVs, I wasn’t sure that I really liked the characters. The sex and drugs aspect of the novel and its gritty characters didn’t necessarily bother me from a contextual perspective but there was something about the main characters that I just didn’t like.

I wasn’t sure if it was a cultural thing or not but something about the main characters just didn’t jive well for me as a reader. The other part of the book that was a little tedious for me was the writing style, again I am not sure if this is a cultural thing, but the beginning of the novel started out a little slow. Eventually the book did gradually pick up and held the pace through until the end thankfully, but I would say the first 30% was a little on the slow side.

Over all this was a satisfying read that was different from books that I would normally review. I liked it, I didn’t LOVE it but I enjoyed the mystery and thought the author spun an intriguing and different narrative.