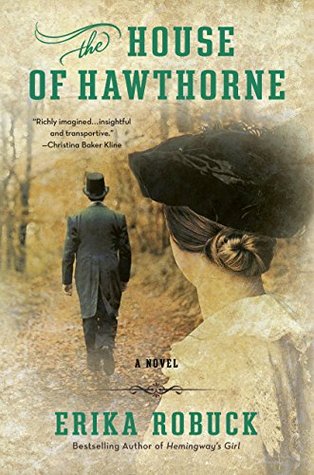 Sophia is a talented artist and writer. Her well known Salem family has discouraged her from pursuing traditional women’s roles such as marriage, in favor of pursuing her creative and educational talents. Plagued by debilitating headaches, Sophia spends a lot of time in bed and her parents even send her to Cuban in hopes of curing her headaches.

While she is in Cuba, she begins writing about some of the slavery she has witnessed in her journal, when she returns to Salem, Massachusetts she catches the eye of upcoming writer Nathaniel Hawthorne.  From their first meeting, Nathaniel and Sophia begin an intense romantic relationship that despite many setbacks leads to their marriage.

Together, they will cross continents, raise children, and experience all the beauty and tragedy of an exceptional partnership. Sophia’s vivid journals and her masterful paintings kindle a fire in Nathaniel, inspiring his writing. But their children’s needs and the death of loved ones steal Sophia’s energy and time for her art, fueling in her a perennial tug-of-war between fulfilling her domestic duties and pursuing her own desires.

This novel spans decades and explores many countries as well as the tension within a famous marriage of two soulful, strong-willed people, each devoted to the other but also driven by a powerful need to explore the far reaches of their creative impulses. It is the story of a forgotten woman in history, who inspired one of the greatest writers of American literature.

I started reading this novel with the expectation of loving it. I love Nathaniel Hawthorne and I’ve been to Salem and Boston Massachusetts so I was super eager to read this book. I also read lots and lots of wonderful reviews about this book too…..so imagine my disappointment when it started really slow.

The whole Cuba part of the novel could have been written out or at the very least pared down. I wanted to get into the novel and romance much earlier than when it started. I was bored for the first 30% of the novel. Once I got past the 30% mark, things started picking up and the love story between Sophia and Nathaniel started heating up and becoming gradually more romantic. I enjoyed the last half of the book, but the first part was really rather boring for me which made me really sad.

Once Nathaniel and Sophia got engaged the book got better. So if you are like me and struggling with the first few chapters, take heart as it does get better.

The one biggest thing that I was most sad about in this book was that I never felt like I connected with Sophia’s character. I felt like she was stuck on things and repeated things too many times. The headaches were important to Sophia’s character but referenced far too much for my liking. She just seemed a little unsure of herself at times which seemed at odds with the way other characters saw her in the novel. She was supposed to be this creative woman who didn’t fit into typical roles of women and she managed to capture the heart of one of America’s most well known writers……but yet she seemed meek and a little unsure of herself at times. So there was this slight feeling of her being mismatched with who she was and how people saw her.

The tender, passionate, and romantic relationship between Sophia and Nathaniel was moving and memorable so that fact alone saved this book for me. Who knew Nathaniel Hawthorne was so romantic….or at least presented to be a very romantic individual. I loved watching their love bloom and flourish on the pages.

I also have to say, I think that Robuck captured the transcendental movement and literary style very very well in this novel. The way things were phrased and her descriptions, were well placed in the book and were very lyrical which fit with the period and the movement.

While I wasn’t in love with this book as I had hoped to be, I did very much enjoy getting to know the woman behind one of American literature’s finest authors.

Book: The House of Hawthorne by Erika Robuck

Company is a burden to those at home in the solitude of their souls.

2 thoughts on “Review: The House of Hawthorne by Erika Robuck”