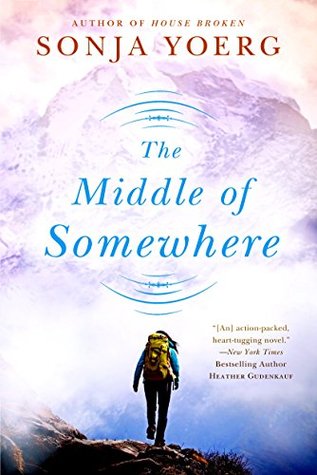 Intense is about the only word I can use to describe this novel!

This book is about one woman’s quest to find herself on the John Muir trail in the western U.S. for 18 day of backpacking.

Liz Kroft’s 30th birthday is coming and she is literally heading for the hills. Liz, is in conflict over secrets she harbors and is suffering remorse over her past actions. Her emotional baggage weighs her down more than her backpack, but a three week trek promises the solitude she craves—at least until her inexperienced hiker boyfriend, Dante, decides to tag along. She is clearly less than happy about that situation.

His broad moral streak makes the prospect of confessing her sins more difficult, but as much as she fears his judgment, she fears losing him more. Maybe.

They set off together alone under blue skies, but it’s not long before storms threaten and two strange brothers appear along the trail. Amid the jagged, towering peaks, Liz must decide whether to admit her mistakes and confront her fears, or face the trail, the brothers and her future alone.

I’ve read Yoerg’s first novel last year which was absolutely WONDERFUL. I was eager to read this one but also hesitant at the same time. This book sounded an awful lot like Wild by Cheryl Strayed but The Middle of Somewhere was a fictional story but in the same vein as Wild (which I haven’t read).

I don’t read a lot of books about ‘finding yourself’ so books like Wild never really grabbed me as a ‘must read’….even with the movie that came out, I just never really got into it so I had reservations about this book……but Yoerg’s writing style is so splendid that I was immediately all in when it came up for review.

This book did not disappoint in the least! It had a believable plot, complex characters, vivid descriptions of the landscape, and Liz’s personal journey was well constructed and moving…..but above all, it was memorable.

This is a book that I’ve thought about long after I finished. Even though it was ‘fictional’ it didn’t feel ‘fictional’. Liz was so real and the emotions she experiences and guilt that she harbors really came across as authentic in the novel. For me personally, as a 34 year old woman, I can relate to a lot of what Liz is feeling. It’s like you hit 30 and all of a sudden it’s like you become an adult and you are at an age where you really can’t screw things up in your life because the effects are far reaching.

While Liz was a widow and struggled with a lot of baggage and I haven’t experienced that, I think the over all theme was the rose colored glasses of your twenty’s coming off and life really happening…..and questions like is it possible to really lead a ‘happy’ life amidst tragedy or just in general? So I could identify with a lot of what Liz was feeling and going through.

The setting and vivid descriptions of the trail was second to none. Stunning, beautiful, and artistic are just a couple of words Yoerg uses to describe the wondrous the John Muir trail.

This was another win for Yoerg. Her writing style is only improving and she has a flawless ability to spin a moving, impactful novel. While it was intensely emotional, I enjoyed every minute of it. This is a novel that will make you think and you will feel every line in the story….but it is so well written and beautiful that even if you are like me and tend to shy away from overly emotional novels…..you will want to keep reading this one. I became invested in Liz’s story and couldn’t put it down! Perfect.

Book: The Middle of Somewhere by Sonja Yoerg

Getting closer to someone doesn’t necessarily clarify anything. It’s like staring at an electron micrograph. You’re closer but nothing’s any simpler.

What goodness she might hold in her heart had been overshadowed by her actions, again and again, She wasn’t a bad person, but she might was well be.

4 thoughts on “Review: The Middle of Somewhere by Sonja Yoerg”