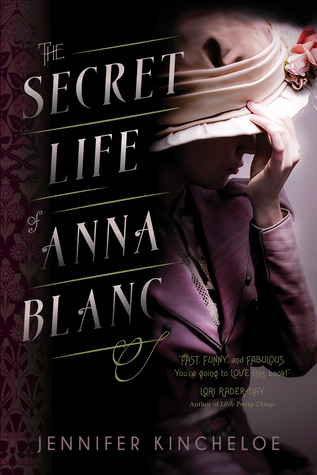 Young socialite Anna Blanc is one walking scandal after the other. She is expected to be a good girl and do exactly what her father wants, however she is impulsive and longing for excietment in her life…..bad combo.

When she runs off to elope with a handsome, but rather rake-ish gentleman, her father intervenes and gets the marriage annulled and takes Anna back to his mansion in LA and basically puts her under house arrest.

Feeling more confined than ever, her eludes her chaperon on a rare afternoon out so she can attend a suffragette rally, but ends up getting arrested instead. While she is at the police station, she discovers that she could actually work in the police office….where excitement happens!

Anna secures a job at the police station but she must keep it a secret from her father and the potential new suitor that will redeem her reputation.

Well Anna hasn’t been very good at following the rules but she does her best to keep ‘police Anna’ separate from ‘socialite Anna’ so she takes on an assumed identity and hopes for the best.

While investigating a series of ‘accidental’ deaths in the red light districts of Los Angeles, Anna is paired with a dashing young detective who quickly discovers her secret. Joe and Anna must work together to solve the mysterious deaths, but things begin to heat up between the two putting Anna at odds with her two lives…..detective Anna and socialite Anna. With a murderer on the loose, the pressure is mounting to solve the crimes before another woman is killed!

For some reason, a lot of the mystery novels that I read are almost exclusively set in London, so at first I was a little hesitant to pick this one up because turn of the century L.A. doesn’t really have any draw for me but I was completely roped in by the setting. It was something new and exciting….different than what I normally read so it was refreshing for me.

I liked Anna a lot as a main character. Some might argue that she was self centered and used people for her own purposes…..while this might be true, I personally didn’t mind. I felt like she was young and naive and was looking for something more out of life but wasn’t sure how to go about it. I felt like her background and upbringing kind of made it hard for her to be anything but self centered so I actually felt like it was fitting for her character. I actually liked her sass and spunk. She was naive and quirky funny which worked well for me. She just came across as this vibrant woman restricted by circumstances and was suffocating and needing to be free to make her own choices. I think that worked well considering the period too.

I also really liked the romance part. There was the right amount of sexual tension between Anna and Joe and I really liked them together. They were each comical in their own ways and when they were together that translated well creating this unique chemistry that I thought worked perfectly.

The only thing that kept me from giving this a 5 star review was some of the linguistic issues. I noted a couple of phrases that didn’t fit within the historical period and for some reason it just distracted me. For example, there was one section where there was a comparison to a Super Bowl game and I found myself wondering why this statement was necessary in a novel set in the early 19th century? It just felt out of place and confused me as a reader….there were a couple of things like this that I felt modern language was substituted when it wasn’t necessary.

But besides that one little critique, I really really enjoyed this book. The mystery was engaging and different, I loved the setting and the historical period, and the romance was equally satisfying. I can’t wait to read the next Anna book!

Book: The Secret Life of Anna Blanc by Jennifer Kincheloe

One thought on “Review: The Secret Life of Anna Blanc by Jennifer Kincheloe”