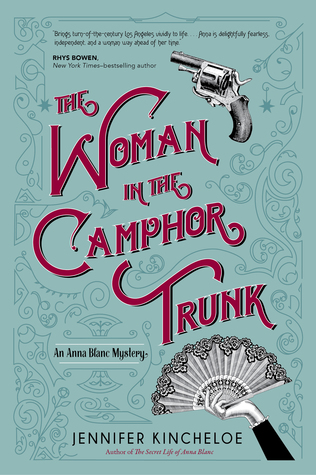 About a couple of years ago, I read the first Anna Blanc mystery and was in love with her character and eager to see the romance develop between her and Joe.

It seemed an age before the next book would come out but then suddenly it was out and I quickly picked it up from my library before anyone else could get their hands on it!

This time we find a very different Anna from the Anna we met in the first book. A once rich society girl, we now find a poor Anna struggling to get by.

Los Angeles, 1908. In Chinatown, the most dangerous beat in Los Angeles, police matron Anna Blanc and her former sweetheart, Detective Joe Singer, discover the body of a white missionary woman, stuffed in a trunk in the apartment of her Chinese lover. Her lover has fled.

If news gets out that a white woman was murdered in Chinatown, there will be a violent backlash against the Chinese. Joe and Anna plan to solve the crime quietly and keep the death a secret. So does good-looking Mr. Jones, a prominent Chinese leader who has mixed feelings about helping the LAPD and about Anna.

Meanwhile, the Hop Sing tong has kidnapped two slave girls from the Bing Kong tong, fuelling existing tensions. They are poised on the verge of a bloody tong war that would put all Chinatown residents in danger.

Joe orders Anna out of Chinatown to keep her safe, but to atone for her own family’s sins, Anna must stay to solve the crime before news of the murder is leaked and Chinatown explodes (summary from Goodreads).

This book was a little difficult for me to review. I spent a majority of the book reflecting on how much of a mess Anna was. Her life was in complete disarray. She is barely making ends meet, Joe has basically told her marry him or he’s moving on. She’s pawning her jewelry to make her rent, she’s barely keeping her head above water and yet she refuses to marry Joe because she wants to continue her police work. About the only thing going right in her life is her job. She’s finally decided that she loves Joe but she won’t marry him and so he’s moving on. Everything about Anna screams rock bottom.

I had a hard time with a romance occurring in the midst of her mess. Part of me felt like, yes she needed Joe and I liked how she wasn’t going to marry him just to be a ‘prisoner’ again. That part worked for me but at the same time I felt like it was unfair for Joe to be actively dating while Anna and he clearly had things to figure out. He also seems somewhat out of touch when it comes to Anna’s situation. Sure he tries to help her out with cooking but I don’t think he understands the extent of her situation and I think she keeps a lot of her situation from him.

For me I felt like she really needed to rise from the ashes and figure out her life and living situation first before getting involved with Joe. I also think that Joe should have waited for her to get her shit together. I thought it was unfair of him to press her into marriage and then parade his women in front of her. I don’t think that was intentional by his character, it seemed more like Anna kept seeing him with other women, but he made it no secret that he wanted to move on.

The relationship became too complicated for me. I love Joe and Anna together but Anna is a mess and I need her to get her shit together so her and Joe and flourish, or for Joe to step in and help her get up on her feet. The way the relationship resolved in this book has promise for future books so I am not entirely over their relationship but I need a lot to happen in the future book.

So relationship issues aside, I loved the mystery. I wrote a paper on Chinese prostitution in San Francisco in the early 1900’s when I was in college, so this book was so so so interesting to me. I loved how much research the author did, it really brought the area and cultural issues to life. The mystery itself had multiple layers and I think that readers will enjoy trying to solve the crime along with Anna.

I personally like the first book better than this one, but this one had an interesting and unique backdrop/mystery which I found intriguing. I am looking forward to future books!

Book: The Woman in the Camphor Trunk (Anna Blanc Mysteries #2) by  Jennifer Kincheloe