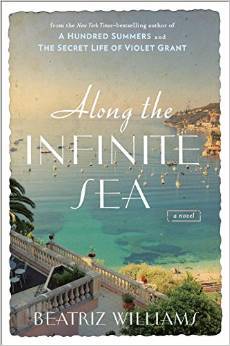 Pepper Schuyler has got some problems and about nine months to figure out how to solve them. With a baby on the way, she needs money…bad and in 1966 she has few options to earn money.

As luck would have it, she finds a rare vintage Mercedes in an old family garage and starts restoring the car. When a woman comes forward and pays an extravagant amount of money for the car, Pepper is relieved. But then the woman wants to meet her.

Annabelle Dommerich claims to have been the original owner of that car and willingly paid $300K for it. After meeting Pepper, Annabelle wants to help her. Somehow Annabelle gets Pepper to agree to come stay with her until she can figure out what to do about the baby.

But it turns out Annabelle has a few secrets of her own. Annabelle was living in the south of France just before WWII broke out. There she met a charming Jewish man, Stefan, who stole her heart. But fate intervenes and they are separated. Annabelle is forced to move on and marries a Nazi general instead but is never quire able to get over Stefan.

The story of Annabelle’s life crisscrosses with Pepper’s to weave this incredible story of love, loss, and friendship all set in the years leading up to WWII and emerging again in the 1960’s.

Confession: I did not want to read this book. It just sounded a little blah to me. The setting sounded random as did the time periods, and the romance sounded cliche….so I wasn’t overly enthused to read it. But I agreed to do a review anyway on a chance that it might be ‘decent’……I had heard a lot about William’s writing style and was at least willing to give it a shot, especially since I like war time novels/romances.

Well readers…I was completely blown away! This book was phenomenal. I loved William’s writing style, it literally roped me in hook line and sinker right off the bat. It was lyrical, mystical, and literally just begging to be read. I was completely wrapped up in the story from the very beginning.

I loved how we got right into Annabelle’s story almost right away. She was alluring and mysterious…..while she was naive and young at the beginning of the novel, there was an air about her character that suggested she was wise beyond her years. I loved seeing how she evolved and changed as life ‘happened’ to her. I really felt like I was growing with her character.

The story between Annabelle, Johann, and Stefan was intriguing and begged the readers interest. I mean how could you not want to know how this unexpected romance turned out or how it came to be in the first place? Rich Jew versus a Nazi General? I was dying to know how this whole thing came about and if there might be a happy ending because frankly I wasn’t sure if that was coming or not because it seemed unlikely! The ending was perfect….literally perfect. I loved how it all turned out for Annabelle.

I wasn’t crazy about Pepper’s character at first. I thought she was a little bratty and just had a chip on her shoulder but at the same time, I admired her spirit in the face of social ruin. By the end of the book I started warming up to her and was eager to see a happy ending for her too.

This book was wonderful. The writing style was beautiful and the romance appropriate and alluring….not to mention the backdrop was perfect. I liked the time distance between what happened just before the war and the fall of of the decisions people make and how the continue to shape their lives even into the 1960s.

I can’t say enough good things about this book, it just made my heart happy. I loved it. This wasn’t the ‘gut wrenching, heart breaking novel’ that it could have been……it easily could have been a heart breaker but it wasn’t, the ending was so fitting. I did not know this was a ‘series’ sort of . It looks like William’s wrote some other books about the Schuyler sisters and this was the final ‘Schuyler Sister‘ book. Well now that I know that….I went on and bought the first book in the series (The Secret Life of Violet Grant). If it’s anything like this novel I am sure I will love it too!

Book: Along the Infinite Sea by Beatriz Williams

6 thoughts on “Review: Along the Infinite Sea by Beatriz Williams”