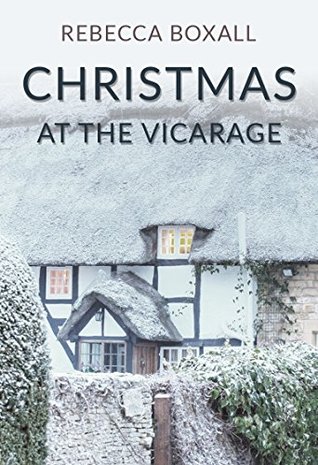 With the holiday season in full swing I was looking for a book that would help me get into the Christmas ‘spirit’ this year. I’ve been kind of hit and miss with my holiday reading over the years but each year I try to find a holiday book that gets me in the Christmas mood.

This year I saw this book all over Goodreads so I was eager to pick it up. I don’t read a ton of modern romances, let alone modern holiday romances so I was anxious to try something new.

Rosamunde hasn’t been to Potter’s Cove or seen her family in fifteen years. After a heart break in the late 20’s, she spent her time abroad traveling the world and having ‘adventures’. But something about the small town of Potter’s Cove started calling her back.

When she returns home, she is greeted by her father, the vicar of Potter’s Cove and Christmas festivities are well underway! But being back home keeps bringing up old memories of a painful romance. With the help of some friends, Rosamunde starts to come to terms with the lost romance and she suddenly begins to feel that it is time for her to possibly love again after all these years of keeping her heart locked away.

With the help of the Christmas spirit, Rosamunde slowly warms to the idea of staying in Potter’s Cove for a while instead of running off and hiding from her past for another fifteen years.

This book was a bit of a disappointment for me. There were plenty of good reviews for this book but for me, I feel like it needed more. For a book that professes to be about Christmas, there was a surprising lack of holiday cheer. Christmas seemed like it was just background noise and I don’t think that it added anything to the over all story or plot. This book could have taken place at any other time of the year and I actually forgot that Christmas was even happening because it so rarely appeared.

The romance was a little random for me too. It could have worked so much better but it seemed like it came too late and was just thrown together. There were moments of sexual tension and romantic hints but overall it just fell short in the romance section for me.

I liked Rosamunde’s character for the most part. I think she began as a very interesting woman with the whole adventurous soul and life experiences, but toward the end she fizzled out a bit for me. She just seemed to kind of give up on love.

Most of this book seemed dedicated to Rosamunde’s first love and how that relationship shaped her but there was no cozy ending or closure for me. I just felt like she runaway from the situation and kind of just gave up on love without having a truly good reason and then all of a sudden found herself in love with a random guy later in the story….it just didn’t really fit for me.

A lot of people really liked this book, so perhaps I am in the minority but I was hoping for a cozy romance full of Christmas cheer and this did not deliver for me. I did however like the setting and the small English countryside and I liked some of the characters and the idea of a woman coming home after a long absence to find love again, and I liked the promise of a new romance between the two characters (this romance could have been so much better), so that said, I was able to keep reading until the end but I finished feeling it wanting more.

Book: Christmas at the Vicarage by