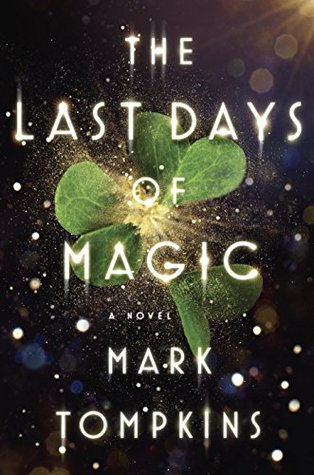 This book has only recently been on my radar. It’s being market to fans of Deborah Harkness’s All Soul’s Trilogy so of course when I saw it, I was excited to read something that promises so much!

It introduces us to unforgettable characters who grapple with quests for power, human frailty, and the longing for knowledge that has been made taboo. Mark Tompkins has crafted a remarkable tale—a feat of world-building that poses astonishing and resonant answers to epic questions.

What became of magic in the world? Who needed to do away with it, and for what reasons? Drawing on myth, legend, fairy tales, and Biblical mysteries, this book imagines answers to these questions, sweeping us back to a world where humans and magical beings co-exist as they had for centuries.

Aisling, a goddess in human form, was born to rule both domains and—with her twin, Anya—unite the Celts with the powerful faeries of the Middle Kingdom. But within medieval Ireland interests are divided, and far from its shores greater forces are mustering.

Both England and Rome have a stake in driving magic from the Emerald Isle. Jordan, the Vatican commander tasked with vanquishing the remnants of otherworldly creatures from a disenchanted Europe, has built a career on such plots. But increasingly he finds himself torn between duty and his desire to understand the magic that has been forbidden.

As kings prepare, exorcists gather, and divisions widen between the warring clans of Ireland, Aisling and Jordan must come to terms with powers given and withheld, while a world that can still foster magic hangs in the balance.

Loyalties are tested, betrayals sown, and the coming war will have repercussions that ripple centuries later, in today’s world—and in particular for a young graduate student named Sara Hill.

This book was a little convoluted for me for one simple reason…..all the Celtic names and lore. I am NOT up on any of my Celtic mythology and I was distracted by many of the characters names in the book. Even though Tompkins did a nice job with staying true to the authenticity of Celtic mythology, I found that I spent an inordinate amount of time trying to decipher the names and understand some of the lore.

One of the things that makes this novel so interested is the intricate history of the Catholic church and the Celtic mythology/lore. While I adored learning about the mythology and re-familiarizing myself with some of the Catholic history, at times I felt like there was an abundance of information which could be overwhelming for some readers.  I think a lot of the historical background could have been edited down to be more manageable, at times it was cumbersome…..interesting, but a little much.

Though I struggled with some aspects of the book, overall I liked it as a debut novel. The characters were well drawn and complex. I liked that the characters were in some way flawed…..so not all good and not all bad, I think that made them more relateable and interesting. Tompkins does a great job at capturing the essence and complexity of faith, love, and loyalty…..and in some cases conflicting loyalty. I really enjoyed the realness in which Tompkins wrote and crafted his characters! That was a big treat for me!

So if you like historical fiction fused with magic, this is a good place to start…..especially if you are tired of traditional fantasy beings such as vampires or werewolves. Reading about all the different fae, gnomes, pixies, and leprechauns along with the Nephilim were new and interesting! Though this book it heavy with lore and history, if you like magic and mythology this is a great choice for fantasy fans!

Book: The Last Days of Magic by Mark Tompkins