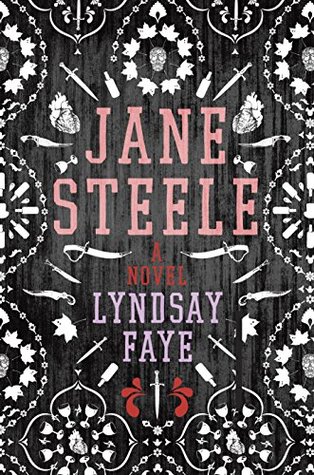 This has been the year of Jane Eyre inspired literature and this latest Jane Eyre revisitation was something quite unexpected.

Any book that has the passage ‘reader I murdered him’ so eloquently stated and matter-of-factly, instantly holds a special place in my heart!

When we first meet Jane Steele she is living with her mother in a small cottage on the grande estate of Highgate House. All her life Jane is told she is to inherit Highgate House but when her mother dies unexpectedly Jane’s evil aunt purposes to send her away to a school where she will learn to be a governess.

After first hearing this news, Jane runs onto the estate to weep and is accompanied by her cousin Edwin who proceeds to try and sexually assault her……but rather than let it happen Jane fights back and suddenly Edwin is dead by Jane’s hand.

Suddenly boarding school doesn’t sound so bad so off she goes. From there we follow Jane through not only a tedious childhood but often uncertain adulthood full of little lies and of course…..a few murders!

Finally Jane finds herself back at Highgate House but this time not as the heiress but as the governess to the new master’s ward.

Charles Thornfield has just returned from the far east with a rather exotic household. He is intrigued by Jane from the moment he meets her and they begin a tedious friendship that grows into more over the Sikh religion and of course murder!

This might come as a shock to a lot of you but I wasn’t necessarily a HUGE fan of Jane Eyre. I mean practically the whole first half of the book was all about Jane’s childhood and I felt like that could have been done away with for the most part. So when I started Jane Steele and found that a large portion was about her childhood, I was a little worried that it would be similar to Jane Eyre in that a large part of the book would be about her childhood.

I loved the exotic far eastern influence! At first I was wondering how this was going to work throughout the story but I thought that it offered the perfect backdrop to the mystery element of the novel.

Faye’s writing style is so versatile! I read one of her other novels last year and really enjoyed her voice and the edge/grit she had. I know some people worried that this novel would be too graphic and honestly I didn’t think it was graphic at all! Sure there were murders, some rather hideous, but overall her writing style didn’t involve large amounts of gore.

As a narrator Jane was great. She was funny at appropriate times, she was brash and confident, and not to mention matter of fact. While there were times when she felt sorry for herself, it didn’t eclipse the overall tone of her character. Like she felt remorseful for her crimes but at the same time she wasn’t in purgatory over them either which I appreciated. It made her seem more strong and independent to me as a reader.

The only thing I would say this novel needed more of was the romantic tension between Thornfield and Jane. In the beginning of their friendship when he was caring for Jane while she was injured, I sensed that maybe there would be more build up and tension, but then things seemed to progress a little too quickly. I wanted just a bit more of a build up for the romance I guess. In general it was satisfying but to make it spectacular and suspenseful I would suggest adding build the romantic tension.