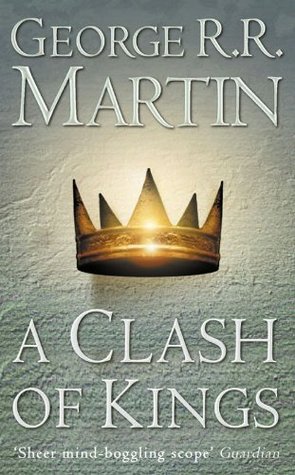 After watching the rapidly developing plot lines of season 6 of Game of Thrones on HBO, I felt the need to re-read the second book in the ASOIAF series.

It’s been two years since I re-read the first book and I got so much out of the second reading that I vowed to continue re-reading the series over the years.

The last time I read the second book was in 2012 so obviously it’s been a while and lots of details have been forgotten. With no real rush or agenda, I started reading the second book back in May and I just finished it in July…..yes it took me much longer to read this time but I chalk that up to being in my third trimester and having the attention span of a gnat at the moment.

I love this series so much. It’s so rich, textured, and character driven. I can’t say enough good things. You don’t have to be a fantasy reader to enjoy this series at all! It’s one of the best books and series I’ve ever read hands down but I will say it is something to savor and revisit frequently (as in re-reads) because you might miss important plot details!

I am not going to give a lot of background on this book since you can see it all from my first review, rather I am just going to get right into my thoughts on this re-read!

The series itself is intricate and tedious and one of the things I remember not liking about this series is how long it took me to get into the first book. Once you get into the story and figure out how to read high fantasy you can fully appreciate the story, characters, prose, and plot….but at times it’s difficult.

With this re-read, I obviously had little trouble tracking the story lines, characters, and lore of the overall series. In fact I found myself digging deeper into some of this Westerosi history, folktales, and legends even more so than I did with my re-reading of the first novel.

One of the problems with the series as a whole is what’s relevant and what isn’t. In the first book for example, there are a lot of characters with strange names and spellings not to mention similar name. Plus I didn’t know what was important in the reading and what wasn’t. By the time you get to the second book, it’s much easier to decipher who is who and which ‘stories’ are relevant to the overall narrative.

In this book we are introduced to even more houses and the roles they play in the ‘game’……we meet Stannis Baratheon and his ‘lords’ and his new religious group. Not to mention a lot of the characters from the first book start moving around Westeros rather than staying in their traditional ‘regions’. For example, you have the Tyrell’s moving up from Highgarden in the south to ultimately find themselves in King’s Landing. So basically there are a lot of people moving around the maps and as the reader you are meeting new important characters that will shape the future of the books so it’s important to pay close attention to how things develop.

For me I was most interested in the prophecy aspects of this book more than I was in the first book and much more than I was when I read this one for the first time. The whole prophecy theme is so prominent in Westeros and so often unreliable in literature but for me that’s what makes it so intriguing. So for example, with this reading I focused more on things like Dany’s visit to the House of the Undying and the visions she had, particularly about her brother Rhaegar and the Prince Who Was Promised. When I read it the first thing, I didn’t put as much stock into the vision as I do now and in later books so I really focused on the symbolism of the event.

Same with some of the visions that Bran had in his ‘wolf dreams’. In this book we meet the Reeds for the first time and they bring an additional mysterious element to the overall story, especially the brother Jojen. He confirms Bran’s gifts and importance in the overall story, so I also focused on their story line more than I did with the first reading of the book. With the first reading it was easier to just read for content and large plot points but as you get further along in other books you will probably find yourself wondering if you missed something important in previous books so I highly recommend at least a second reading.

For example, I had forgotten all about the Patchface, the fool from Dragonstone. When I read the book the first time I simply thought of him as nothing more than a random figure meant to introduce us to the Princess Shireen and Dragonstone but a lot of people have speculated that Patchface has a more significant role to play. On the ASOIAF Wiki some have suggested that he may have had some prophetic powers which would help explain Lord Steffon’s decision to bring him to Westeros.

Or maybe they have developed somehow as a consequence of his misfortune. There is also the possibility that he is a vessel for someone else’s words, as we have occasionally seen happen with ravens and weirwood trees. As Patchface apparently drowned but was revived, and makes frequent references to events underwater, it is theorized he may be connected to the Drowned God of the Ironborn. This may be why Melisandre considers him dangerous, as she may associate the Drowned God with the Great Other.

So obviously there are a lot of little details that are easily dismissed as nothing more than the richness of the world but yet could actually have impactful or meaningful influence on the characters in the story or on the plots themselves.

This time, I read slowly and savored the story and I read everything carefully. I did spend a lot of time on the Wiki but not because I was lost and trying to navigate, but so I could gain a deeper understanding and perspective of how certain people and events worked together in the novel.

Let’s be honest, Martin’s novels aren’t for the casual reader. They are complex, tedious, intelligent reads. You can’t miss a thing so you really need to be focused on what you are reading.

I find that reading ACOK this time, I did better when I could read for at least an hour at a time. I could get through 2-3 POV chapters and analyze them in short increments rather than reading for hours at a time trying to digest everything. Westeros really came alive this second time, the cities especially became more ‘real’ to me.

If you are thinking about reading the A Song of Ice and Fire series, I highly recommend it. It’s a complex novel with ambiguous characters…no one is completely evil or completely good, they have both light and dark in them.

The magnitude and size might be intimidating but entirely worth it. Reading it again I got so much more out of it so I you raced through the first time, I recommend another go around to fully appreciate what you are reading. But one thing is for sure…..you don’t want to fall asleep in Westeros, you might miss key details in the novel!

Take Two Review Book Edition: A Clash of Kings (A Song of Ice and Fire #2) by George R.R. Martin

One thought on “Take Two Review: A Clash of Kings (A Song of Ice and Fire #2) by George R. R. Martin”