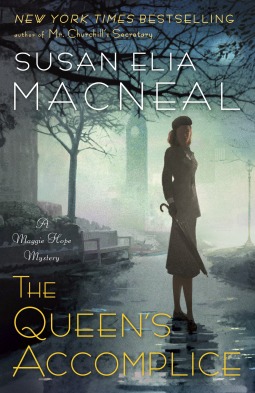 I’ve been a fan of Maggie Hope for quite some time now. I read the first book when it came out and fell in love with that sassy red head.

Over the years, Maggie’s adventures have been one part spy and one part detective/mystery series. Maggie has also evolved immensely as a character which if both exciting and at times a little sad when you look back on how much she has changed over the course of the books.

In this book, there is a madman on the loose, systematically murdering women in the fashion of Jack the Ripper. Dubbed ‘The Blackout Beast’ by the press and the women of London disappearing only to turn up mutilated, Maggie is recruited by MI-5 to assist on the case.

But Maggie isn’t going to ‘go it alone’ on this one, she is partnered with a real life Sherlock Holmes detective by the name of Detective Chief Inspector James Durgin.

The murders seem to be following a distinct pattern, one which DCI Durgin has spent much time analyzing. He begrudgingly allows Maggie to tag along but makes it clear he doesn’t think this is a good idea. Maggie quickly proves her worth and shows she has knowledge to contribute if they are going to catch the Blackout Beast.

But little does Maggie know, the Blackout Beast has his eyes set on her as his final ‘Jack the Ripper’ victim! Will Maggie and DCI Durgin be able to solve the case before it’s too late?

I really enjoyed this installment, for one it’s set back in England and two, I love seeing Maggie get back to her ‘roots’ so to speak. She is using math again and relying other logic to solve a complicated murder rather than spying on the Nazis. I love seeing her logic at work and in this book I was treated to a lot of ‘sleuthing’ and Maggie’s own brand of crime solving.

I don’t know that I loved the premise for the murders as it kind of seemed like a ‘been there done that’ plot but for the most part I think it worked ok and I liked the different twists and ultimately the ending was a surprise…..though I wish some things had been cleared up a little more but it worked.

One thing that I always find myself hoping for is a ‘happily ever after’ for Maggie. Though she’s more of a ‘career girl’ in the books, she’s had a number of different love interests throughout the series and I always keep hoping that she will find someone and fall madly in love. In this book there is a hint of a love interest developing for Maggie but I was sad that it seems to be tabled for the time being.

I wanted more romantic tension and possible more time for the relationship to evolve for Maggie and her love interest…..wether it’s in this book or future books. It just seemed like when this book ended that Maggie and her love interest were going to part ways but it was implied that they would be meeting again in future books…..however I wanted something a little more concrete.

While I was left wanting more romance at the end of this book, I was excited to see that Maggie’s adventures might take her back to the ‘spy’ role and that sounds intriguing! I can’t decide which role I like Maggie in more….a detective solving crimes or an undercover agent spying on the Nazis! She’s so good at both! I can’t wait to see where her adventures take her next.

I also liked that some new plot lines were introduced in this book. It looks like there are potentially interesting plots developing for Elise, Sarah, and Hugh. I am especially interested in what’s going to happen to Elise. Originally I wasn’t that into that storyline in previous books but now I am intrigued so I am looking forward to future books to see what happens to her.

If you haven’t read the Maggie Hops books yet, you should really consider them! They are great reads and fans of the Masie Dobbs books will love this sassy red head!