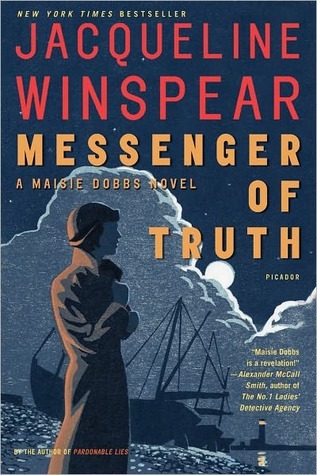 So after reading the third Maisie book, I was kind of on a ‘Great War’ mysteries kick so I decided to continue on with the next book in the series, Messenger of Truth.

I was impressed with how the third book developed and the next book sounded equally as intriguing that I just couldn’t help myself.

This time Maisie is called to assist on what appears to be an accident. Up and coming controversial artist Nicholas Bassington-Hope is set to open an exhibit that has been receiving a lot of hype. The night before the big event, he takes a fall from the scaffolding, breaking his neck.

It appears to be a clear cut accident however, his twin sister Georgina, just knows it’s not an accident and enlists Maisie to help solve the case.

Maisie jumps head first into the mysterious underworld of fine art. She again uncovers the dark legacy of the Great War in a society struggling to recollect itself in difficult times. But to solve the mystery of the artist’s death, she will have to remain steady as the forces behind his death come out of the shadows to silence her.

While this book had some slower parts, for the most part it was pretty interesting! I loved the art angle and I loved seeing Maisie try to navigate not only in an art world that she barely understands but also mixing in a society she feels out of place in. I thought that was one of the most interesting aspects of this novel!

As I have said before in other reviews of this series, I felt less than connected to Maisie on occasion, but as the series goes on I feel like I’m able to connect to her a little more with each book. She’s a complicated heroine with a complicated past that comes out in the books so I guess it makes sense that the reader might not feel as though they ‘know’ her that well.

I was pleased with the direction that her character went with casual love interested, Andrew Dene. Maisie’s character talked about feeling the pressures of marriage but also feeling the joy of independence so I liked that the book addressed that issue and resolved the Andrew Dene situation. That said I do wish for some more romance in this series. I like that the focus is on the mystery and other elements but at the same time I like Maisie and feel like romance (even if it’s unconventional) would help her seem more ‘real’ or more relateable maybe?

The mystery in this book was well constructed and interesting. I love the art angle as I mentioned before and I really enjoyed how the mystery came together in the end because I could not work it out until it was ‘revealed’ at the end. I had my suspicions but I was far from close so that was fun for me to try and work out throughout the novel. Sometimes in this series I feel like Maisie hoards information and doesn’t share anything or even hint to her audience which can be frustrating at times but I am finding that she is doing that less and less which I appreciate about the books.

Overall I think I will continue with the series. As I have said before I love the premise and setting and this series has a lot to recommend itself to audiences plus I see signs of improvement in the series so I am resolved to continue at this point.

One thought on “Review: Messenger of Truth (Maisie Dobbs #4) by Jacqueline Winspear”