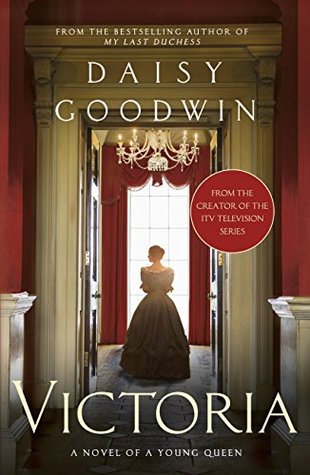 I am going to preface this post by saying that Queen Victoria is absolutely my favorite queen! I’ve had my eye on this book for MONTHS waiting for it to come out.

When this came up for review I literally jumped for joy. So I was already geared up to love this one but my biggest fear was that because I was so excited to read it that I didn’t want to be let down if it wasn’t good.

Well my fears were entirely unfounded! This was an excellent read!

Less than a month after her eighteenth birthday, a young Alexandrina Victoria is roused from bed with the news that her uncle has died and she is now Queen of England.

The men who run the country have doubts about whether this sheltered young woman can rule the greatest nation in the world. Surely she must rely on her mother and her adviser, Sir John Conroy, or her uncle, the Duke of Cumberland, who are all too eager to relieve her of the burdens of power.

She has very definite ideas about the kind of queen she wants to be, and the first thing is to choose her name.

Everyone keeps saying she is destined to marry her first cousin, Prince Albert of Saxe-Coburg-Gotha, but Victoria found him dull and priggish when they met three years ago. She is quite happy being queen with the help of her prime minister, Lord Melbourne, who may be old enough to be her father but is the first person to take her seriously.

The story itself flows very well and the ending was fitting and satisfying. I loved that the story focused on the family dynamics and romance rather than the politics of her reign. Sometimes historical fiction novels tend to focus too much on the historical elements and politics of the era, especially of royal figures and it can distract from the central story.

It’s hard to decide which things are important to include and which things are more tangents. Goodwin does a fantastic job at keeping things focused on the family and romance rather than overwhelming the reader with historical facts and figures. There are plenty of historical, fact based works on Queen Victoria, this book was meant to be more entertaining and loosely informative.

The characters themselves were well drawn and interesting. Victoria herself was easily likable and sympathetic and I think that a lot of readers will identify with her and enjoy getting to know her. Daisy Goodwin also wrote for the PBS/Masterpiece show, Victoria, and I guess this book basically follow the same plot. I haven’t seen the show but after reading this book I am going to watch it for sure!

If you are looking for a historical biography of Queen Victoria then this probably isn’t the book for you but if you are looking for something entertaining based on historical facts then I think you will love this one. There are some parts that are a little melodramatic but on the whole this is a fantastic read that I enjoyed immensely!

One thought on “Review: Victoria by Daisy Goodwin”