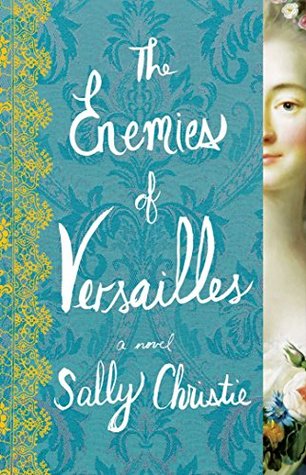 Here we are yet again with another book series reaching its conclusion! On the whole this has been a solid, well written, and interesting series and I was sad to see it coming to an end.

I had big expectations for this conclusion and overall I wasn’t disappointed.

Jeanne Becu, a woman of astounding beauty but humble birth, works her way from the grimy back streets of Paris to the palace of Versailles, where the aging King Louis XV has become a jaded and bitter old philanderer.

Jeanne bursts into his life and, as the Comtesse du Barry, quickly becomes his official mistress. “That beastly bourgeois Pompadour was one thing; a common prostitute quite another kettle of fish.”

After decades suffering the King’s endless stream of Royal Favorites, the princesses of the Court have reached a breaking point. Horrified that he would bring the lowborn Comtesse du Barry into the hallowed halls of Versailles, Louis XV’s daughters, led by the indomitable Madame Adelaide, vow eternal enmity and enlist the young dauphiness Marie Antoinette in their fight against the new mistress.

But as tensions rise and the French Revolution draws closer, a prostitute in the palace soon becomes the least of the nobility’s concerns.

There is something so elegant and magnetic about the French court…..at least for me. While my heart will always be in the British court, the French have an elegance and lure that is different than other books on royalty. Having enjoyed the other two books in the series, I was excited to see where this book would take us in the court.

I’ve read some books on royal mistresses so I know a little about the Comtesse du Barry before reading this story. Of all Louis’s mistresses, this was the one that intrigued me the most. Reading her story (albeit the historical fiction version) was insightful and intriguing. One of the things that I noted about Christie’s other books, was the way she portrays her female lead characters.

I’ve read a a lot of nonfiction books on royalty and that talk about the relationships Louis had with his mistresses, but none of the books made the mistresses stories as ‘real’, sexy, and yet modern as Christie has done in her books. And this installment was no different.

Christie keeps the dialogue modern, the text crisp, and the historical facts to the point and relevant. She doesn’t go off on tangents and I love that about her novels! The story alternates between Jeanne and Madame Adelaide’s perspectives which kept things interesting and moving along briskly.

The one things that bothered me at times throughout the novel was Madame Adelaide’s inner dialogue and thoughts. I felt like she was spoiled and arrogant and kind of annoying at times. Yes she was a princess and as other reviewers commented, her inner dialogue was a little over the top which I would agree with.

Overall I thought the account of their lives was believable and interesting. I wasn’t as invested in this one as I had been with the other books in the series but on the whole I felt like it ended on a high note. I liked how this book incorporated the Revolution as well as the having Marie Antoinette come into play. This is a well researched but yet fresh and modern novel with scandal and intrigue built it!

Thursday, March 16
Review at Leeanna.me
Review at The Lit Bitch

Friday, March 17
Review at To Read, Or Not to Read
Review at History From a Woman’s Perspective
Spotlight at What Is That Book About

Sunday, March 19
Spotlight at Passages to the Past

Monday, March 20
Review at A Chick Who Reads

Wednesday, March 22
Review at First Impressions Reviews
Review at Oh, for the Hook of a Book!

Sunday, March 26
Review at The Gadoury Dreamer
Review & Interview at Clarissa Reads It All

Wednesday, March 29
Review at Impressions in Ink
Review at A Bookaholic Swede

Thursday, March 30
Review at Curling up by the Fire