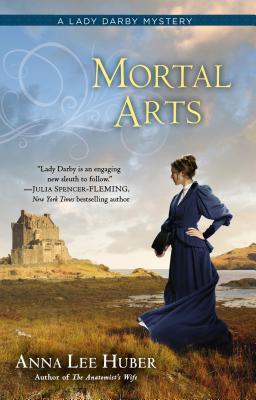 After rapidly finishing the first Lady Darby book, I knew that I would need the next one. I didn’t care that the book cost $14.00 on my Kindle and I had tons of other books I could read….I had to know what happened to Gage and Kiera next!

Crumbling castle on the coast, a madman locked in the attic, an asylum looming ominously off the North Sea coast, a family fallen from grace, a howling ghost dog legend, family secrets, and murder most foul? YES! All things that I love in a Gothic novel, plus you add the budding affection between Kiera and Gage and you easily have a five star rating from me!

Scotland, 1830. Lady Kiera Darby is no stranger to intrigue—in fact, it seems to follow wherever she goes. After her foray into murder investigation, Kiera must journey to Edinburgh with her family so that her pregnant sister can be close to proper medical care. But the city is full of many things Kiera isn’t quite ready to face: the society ladies keen on judging her, her fellow investigator—and romantic entanglement—Sebastian Gage, and ultimately, another deadly mystery.

Kiera’s old friend Michael Dalmay is about to be married, but the arrival of his older brother—and Kiera’s childhood art tutor—William, has thrown everything into chaos. For ten years Will has been missing, committed to an insane asylum by his own father. Kiera is sympathetic to her mentor’s plight, especially when rumors swirl about a local girl gone missing. Now Kiera must once again employ her knowledge of the macabre and join forces with Gage in order to prove the innocence of a beloved family friend—and save the marriage of another…(summary from Goodreads).

I loved how prominent the madness element was in this novel. I thought it added a layer of uncertainty that would keep readers on edge. Because of the uncertainty surrounding Will, I found myself second guessing everything we were being told. Was Kiera just bias or was she wrong? I loved the not knowing if we could trust one of the major characters.

The chemistry between Gage and Kiera is also really heating up. I love how mysterious Gage is and how we don’t really know too much about him in the first book besides that he is ‘charming’ and now in this book we start learning a ton more about him. He’s like an onion….peeling a layer back one at a time and I am literally LOVING IT! Watching the growing affection between Kiera and him is just so exciting. I especially love that the author is dragging it out over the course of the books rather than rush to ‘put a ring on it’ in like the first book.

One thing that I struggled a little bit with was Kiera’s devotion to Will. I felt like her defense of him was more than the acquaintance warranted. He was her drawing tutor for a few short months, and I felt like Gage had reason to believe there was a romantic interest and frankly I felt like she was holding back as well. I gathered that she was infatuated with him, but I just felt like her devotion to him and her defense and her feelings at the end of the book just didn’t jive with me. The reason for her devotion was because he had faith in her art and herself as well as her abilities, which I suppose was a good enough reason, but still I felt like it wasn’t enough. But in the end I simply didn’t care. I was too wrapped up in the mystery and the darker content and the heating up romance to put much thought into it.

There was plenty to love in this latest installment and I loved loved loved the Gothic feel of this novel. I immediately downloaded the third book in this series as soon as I finished this book…..even if it was another $14.00, it was $14.00 well spent if you ask me!