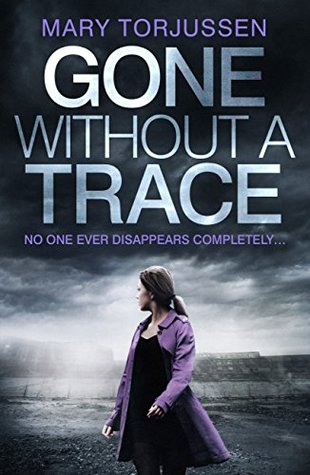 When I read mysteries, I typically read historical mysteries but from time to time, a modern psychological thriller captures my eye and I pick it up but I kind of have to be in the mood.

Well the mood struck me when Gone Without A Trace came up for review. So what caught my eye about this one? Well I liked the tag line ‘no one disappears completely’. One of my favorite shows on ID TV is Disappeared, so books that deal with disappearances intrigue me because that tag line is so true and the not knowing drives the interest for me.

Gone Without a Trace is a compulsive thriller about a woman who returns from work to find her boyfriend has vanished.

No one ever disappears completely…
You leave for work one morning. Another day in your normal life. Until you come home to discover that your boyfriend has gone.

His belongings have disappeared. He hasn’t been at work for weeks. It’s as if he never existed. But that’s not possible, is it? And there is worse still to come. Because just as you are searching for him, someone is also watching you (summary from Goodreads).

This book is told in the first person which I thought worked well for the story and a point of view that I think typically works well within suspense or thriller novels. For me though, Hannah as a main character was at times a little over dramatic and that kind of bothered me. I prefer my main characters, especially women leads, less drama. I think what bothered me the most was at first she had questions but when things started to look like he simply left her, why keep beating a dead horse so to speak? I don’t know, had it been me I would have been like fine you left me, your loss and move on.

Finding Matt becomes an obsession for her in a way that I couldn’t necessarily relate to as a reader. While at times she seemed justified in her frustration and obsession, I just had a hard time relating to her. After a while I did start questioning her reliability as a POV character which ultimately became the driving force for me to continue reading this one.

Something about this book just fell short for me. It was a little slower paced that I expected for a book that’s supposed to be a thriller and the plot wasn’t exactly ‘fresh’ in my opinion. With the success of books like Gone Girl, I think this book tried to capitalize on that trend, but for me it feel just in the middle of the road (as did Gone Girl in my opinion).

That said, I did enjoy the whole unreliable narrator piece and as I mentioned earlier, I like books about disappearances so that kept me reading. I had to know what happened to Matt. While not as obsessive as Hannah, I was intrigued nevertheless and wanted to know what happened to him. I was ultimately invested enough in the story to keep reading and find out what happened to the characters but at the same time I wasn’t desperately trying to finish the book as fast as I could to find the resolution.

The other suggestion I had was adding more substance to the summary. For me, it wasn’t enough to garner any attention. It was bland and not appealing. Had I not been in the mood to read a psychological thriller, I probably would have passed on this one based on the summary. It was worthy of a more detailed synopsis.

On the whole, it earned three stars from me. Ok, but not mind blowing.

Book: Gone Without A Trace by Mary Torjussen

One thought on “Review: Gone Without A Trace by Mary Torjussen”