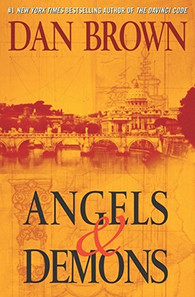 Langdon’s worst fears are confirmed on the eve of the holy conclave, when a messenger of the Illuminati announces they have hidden an unstoppable time bomb at the very heart of Vatican City. With the countdown under way, Langdon jets to Rome to join forces with Vittoria Vetra, a beautiful and mysterious Italian scientist, to assist the Vatican in a desperate bid for survival.

Embarking on a frantic hunt through sealed crypts, dangerous catacombs, deserted cathedrals, and even the most secretive vault on earth, Langdon and Vetra follow a 400-year-old trail of ancient symbols that snakes across Rome toward the long-forgotten Illuminati lair … a clandestine location that contains the only hope for Vatican salvation (summary from Goodreads).

I’ve seen the movie version of this book many times so I already kind of knew what was going to happen, what I was hoping to glean from reading the book was more detail about some of the major plot points. What I basically got was the movie still. The only thing that I felt was different was the lengthy explanation about the anti-matter. In some ways that was disappointing, but at the same time I still kept reading and as interested in the story.

The long explanation about anti-matter was tedious and annoying in my opinion though. If it had to take up that much of the story, then it was too complicated. And it was complicated and I found myself skipping over some of the science-y stuff because I was lost and I basically felt like—ok we get it, it’s an undetectable bomb, let’s move on. Some of the early parts in the story were too far fetched to be believable. A rocket ship that takes you from Boston to Switzerland in an hour? And don’t even get me started on the plausibility of anti-matter and the CERN bunker etc. It was all so over the top, even for Brown, that I had a hard time buying in. Yet I read on.

I heard about Mickey Mouse a few too many times in this story, and there were a bunch of cheesy lines, a flimsy ‘romance’, and I had a hard time accepting that all the Vatican rules were being tossed out the window but yet I read on. Something about religious history, especially Catholic history, really gets me. I was basically in it for the religious history. There wasn’t a ton of research of historical data in this book as there was for The Da Vinci Code, but it was still interesting to read all the same.

I am a Catholic myself, but I am not a ‘Dan Brown is the devil’ Catholic. I take his stories for what they are….entertainment. I don’t care if his ‘facts’ on Catholicism and it’s beliefs are unfounded or inaccurate, it’s a historical fiction thriller…..not a history book.

Reading this book was both annoying and interesting at the same time. I didn’t care for some of the elements or writing in this book, and some times the plot stalled because too much was happening, but at the same time when I wasn’t reading it, I was constantly thinking about what was going to happen next. The movie basically follows the book so if you saw the movie you basically read the book, and yet I felt like the book was better.

Yes this book had a lot of mechanical issues and it was almost a little too extravagant to even be believable but yet it was still a worthwhile read. This would be a great beach or vacation read or even an airplane read. It’s distracting enough to be enjoyable and not so detailed that you need to fully pay attention to every single line. Would I read the other books in the Robert Langdon series….absolutely!

Happy international women’s day ladies!!!! Here is to al the bad ass women who are juggling jobs, motherhood, marriages/relationships and all the other things we ladies do! You are all an inspiration and today we celebrate all of you!
I love when hard cover books have beautiful designs lurking under the covers! This is my first edition copy of A Dance with Dragons and I loved the elegant design on the cover here! ⁠⁠
It's Sunday and that means another #shelfiesunday coming' at ya! I have only recently gotten into horror novels and I have read quite a few that I really enjoy. So today I am featuring some of my favorite horror novels here! ⁠⁠
There is something about Lala Land that adds so much glamour to a murder mystery. This latest novel from @pegasus_books promises all the thrills and glamour of a Hollywood murder mystery! Check this one out!