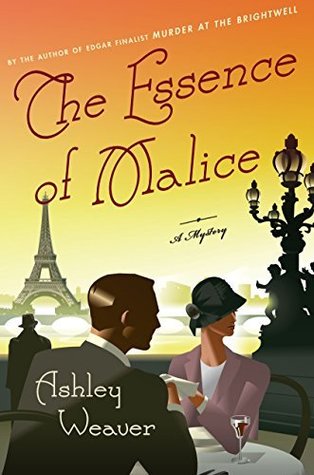 Here I am, yet another late comer to a new mystery series and I find myself wondering how in fact I missed this series in the first place!

Picking up a book mid series is always a risk, but I have found that more often than not, the author tries to fill in the missing links for new readers so they don’t feel like they need to start at the beginning. However sometimes it’s just not possible to go back and try to recap everything that a new reader might have missed.

While this book was well written and fun to read, I did feel like I needed the other books to stay up to par with everything that was going on.

When Milo Ames receives a troubling letter from his childhood nanny, Madame Nanette, he and Amory travel to Paris where they are soon embroiled in a mystery surrounding the death of a famous parfumier. Helios Belanger died suddenly, shortly before the release of his newest, highly-anticipated perfume, and Madame Nanette, who works for the family, is convinced that her employer’s death was not due to natural causes.

The more Amory and Milo look into the motives of industry rivals and the Belanger heirs who are vying for control of his perfume empire, the more they are convinced that Nanette may be right. When secrets unfold and things take a dangerous turn, Amory and Milo must work quickly to uncover the essence of the matter and catch a killer before the scent goes cold (summary from Goodreads).

The relationship between Milo and Amory was tedious and complicated in my opinion. I wasn’t quite sure the nature of their relationship–even though they were married–I felt like I needed the other books to sort out the nuances of their relationship. It just seemed unconventional and not the typical kind of relationship that one finds in these types of mystery novels. There was a lot about Milo that I felt needed explaining and I don’t know that we even scratched the surface of it in this book. At times I wasn’t even sure that I liked Milo so I struggled with their relationship which is why I felt like I needed the other books to help explain and justify or ratify my feelings toward him.

I did love the setting and time period though. The 1920’s and 1930’s are such a trendy period in literature right now and while I have been reluctant to get on board that trend, I still don’t mind the occasional venture into that time period when the mood strikes–as in this case. Paris was the perfect setting for this time period and I loved exploring the Parisian night life as well as the perfume industry. The perfume industry is fascinating and I thought it brought a lot of interest to this novel and what better place to explore perfume than in Paris. I also thought that Weaver did a great job showcasing the ‘lifestyles of the rich and famous’ in Paris at that time. She clearly researched the era and worked to bring it to life for her readers.

The mystery itself was satisfying and ended up going in a direction that I didn’t see coming.I enjoyed the twists and turns and ultimately the resolution of the mystery. While there were things to enjoy and like in this book, there were also too many things the I felt like I was missing. It was an ok read on its own but I really feel that going back and gather the larger picture in the other books would be a huge benefit to new readers in this series. I hate to give this one a 3 star rating based on the fact that I haven’t read the other books, but because I didn’t have all the pieces from earlier books, I felt like I couldn’t enjoy it to the degree that I wanted to.

Book: The Essence of Malice (Amory Ames #4) by Ashley Weaver