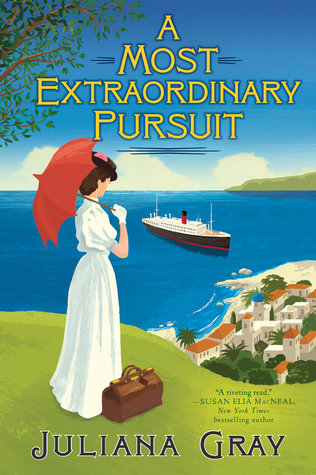 About three chapters into A STRANGE SCOTTISH SHORE, I knew that I needed to read the first book in this series.

For one, I thought it would help me figure out some of the little nuances in the book that I was missing, as well as the backstory for many of the characters and their relationships.

So confession….I put down A STRANGE SCOTTISH SHORE about five chapters in and started reading this one instead. I just felt like there were so many little things that I was missing and I felt like I was cheating myself by skipping the first book.

As the personal secretary of the recently departed Duke of Olympia—and a woman of good character—Miss Emmeline Rose Truelove never expected to be steaming through the Mediterranean on a luxuriously appointed yacht under the watchful and jovial eye of one Lord Silverton. But here they are, as improper as it is, on a quest to find the duke’s heir, whereabouts unknown.

An expert on anachronisms, the adventurous Maximilian Haywood was last seen at an archaeological dig on the island of Crete. And when Truelove and Silverton disembark, they are met with incidents of a violent nature: a ransacked flat, a murdered government employee, an assassination attempt. And as they steam from port to port on Max’s trail, dodging danger at every turn, Truelove will discover the folly of her misconceptions—about the whims of the heart, the desires of men, and the nature of time itself (summary from Goodreads).

I am glad I decided to read this one before going on to the second book, this one helped fill in the gaps on a lot of different issues I had with the second book. For one, the relationship between Lord Silverton and Truelove. I love them together, they have a chemistry that is undeniable and charming mixed with a little humor. I love the arrogant yet roguish air of Lord Silverton. He is cocky but knows his mind and that he has met his match in Emmeline Truelove.

Truelove has sassy, intelligence, and a quirky streak. She is a no-holds-bar king of lady and Silverton (as well as the readers) will find a charming heroine in Emmeline Truelove. However she can be stubborn to a fault which I found frustrating as a reader. She was so sure that Lord Silverton couldn’t truly be in love with her nor could he ever change his ways. I don’t know that I ever bought into the idea of him being an unchangeable rake to the degree that Truelove thought he was, but I’m willing to buy in to it at least a little.

I don’t know that Gray laid enough ground work for us to believe he was unchangeable in the way that Truelove felt he was and on the other side of that coin, I don’t know that she did enough to justify why Truelove fought off his intentions so vehemently. She was so sure that he couldn’t love her–and honestly I wasn’t sure that he loved her or if he was infatuated with her–but yet at the same time, there was nothing indicating that he was being anything other than honest. So basically by the end I fell in with the Truelove camp and questioned just how much truth was in Lord Silverton’s feelings.

One thing I wished that Gray had done was build up the time travel piece a little more. Clearly there were other characters in the story from the future and characters from the past moving through the story but it wasn’t really discussed, only hinted at. Which obviously suggests more explanation in future books but still I felt like I needed a little more.

I think I could have done without the ghosts that Truelove sees on the whole and settled for a real life friend instead. I didn’t think the ghosts added anything to the story. If anything I found myself confused as to their overall purpose. I also didn’t care for the excerpts from The Book of Time before each chapter. I failed to grasp their importance in the narrative and found myself skipping over them only to discover that they played a larger role in the story.

Though this book had some flaws and kinks, on the whole, I liked it. I am glad I decided to set aside the second book so that I could read this one first. The second book made so much more sense after reading this one and in my opinion the second book is much better but this book is the necessary book for foundation purposes.

Book: A Most Extraordinary Pursuit (Emmeline Truelove #1) by Juliana Gray