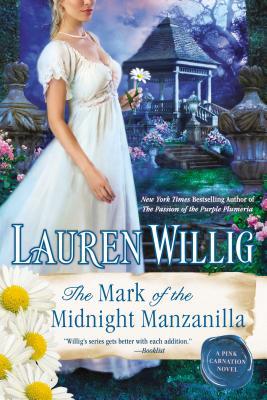 This was the book  I was least excited about reading in the series. It sounded completely out of Willig’s usual formula….like so far removed from her usual style that I just wasn’t thrilled about it.

Vampires? In this series. No, no, and just no.

Plus the heroine, Sally Fitzhugh, is not one that has even been on the fringes of the series up until like the last book and even then it was minimal.

However, as I have said before, I am continually impressed with her ability to hook me into a believable romance and prove all my misconceptions wrong. So I tried to keep an open mind when I started reading.

In October of 1806, the Little Season is in full swing, and Sally Fitzhugh has had enough of the endless parties and balls. With a rampant vampire craze sparked by the novel The Convent of Orsino, it seems no one can speak of anything else. But when Sally hears a rumor that the reclusive Duke of Belliston is an actual vampire, she cannot resist the challenge of proving such nonsense false. At a ball in Belliston Square, she ventures across the gardens and encounters the mysterious Duke.

Lucien, Duke of Belliston, is well versed in the trouble gossip can bring. He’s returned home to dispel the rumors of scandal surrounding his parents’ deaths, which hint at everything from treason to dark sorcery. While he searches for the truth, he welcomes his fearsome reputation—until a woman is found dead in Richmond. Her blood drained from her throat.

Lucien and Sally join forces to stop the so-called vampire from killing again. Someone managed to get away with killing the last Duke of Belliston. But they won’t kill this duke—not if Sally has anything to say about it (summary from Goodreads).

Let’s just get the fangirl moment out of the way first shall we……I LOVED THIS BOOK. I read it almost in one sitting. It surprised me in so many ways. This book read different than any go the others in the series but yet managed to maintain the familiarity of the Pink Carnation series as a whole. Yes I started it about a week before Halloween and the ‘vampire’ elements fit right into the whole holiday feel and this book had an actual murder mystery where as the others don’t have that. It was such a perfect Halloween read.

Sally, while high handed at times, was extremely likable. Some might argue that she was a little flat and forgettable when compared to other characters like Miss Gwen, but I found her witty and more like a younger version of Miss Gwen. I loved how she was so protective of Lucien even when she hardly knew him. She was his champion from the beginning.

Lucien was the perfect brooding hero. He has a complicated and dark past that we only seem to scratch the surface of in this book. It becomes apparent from the beginning that he’s had a hard life and readers can’t help but feel sorry for him and hopeful that he will find the family he has always been looking for when he meets Sally. In some ways he’s a little on the sad puppy dog side, but the way that Sally comes in and gives him strength throughout the story is touching and beautiful. I loved their romance.

While this book was an easy 5 star for me, there were parts of the plot that felt unfinished. For instance, the relationship between Hal, Clarissa, and Lucien seemed completely unresolved and left me wondering what happened to those plot points that Willig seemed to spend so much time on. They weren’t that important to the overall story in retrospect but I felt like she spent a lot of time introducing the characters and then didn’t really do anything with them. So in that sense I wanted more.

Overall though, I loved this book, flaws in the characters, romance, plot and all. It had a Gothic feel which we all know that I love and the romance was brooding and sensual in a way that the other books just aren’t.

Book: The Mask of the Midnight Manzanilla (Pin Carnation #11) by Lauren Willig

2 thoughts on “Review: The Mark of the Midnight Manzanilla (Pink Carnation #11) by Lauren Willig”