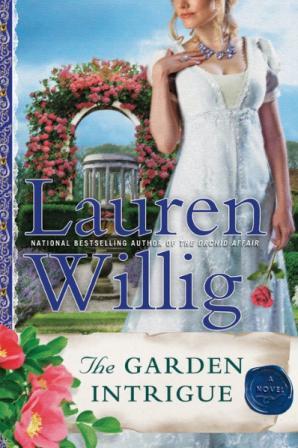 This year I decided to officially participate in Dewey’s 24 Hour Readathon for the first time ever. I had some time on my hands and some good books to start reading so I was eager for an excuse to sit and read undisturbed while my husband watched out little one.

I started The Garden of Intrigue almost immediately after completing The Orchid Affair and I’ll be honest, I was supposed to read it for Readathon but I almost finished it before Readathon even started!

Again, I’ll be honest and say that I was not looking forward to reading this one. Augustus Whittlesby was the singularly most annoying character in The Orchid Affair. His poetry was so over the top and I just couldn’t stomach him for more than a page or two.

I had serious reservations about this book but it’s the next in the series so I didn’t feel like I could avoid it.

Secret agent Augustus Whittlesby has spent a decade undercover in France, posing as an insufferably bad poet. The French surveillance officers can’t bear to read his work closely enough to recognize the information drowned in a sea of verbiage.

New York-born Emma Morris Delagardie is a thorn in Augustus’s side. An old school friend of Napoleon’s stepdaughter, she came to France with her uncle, the American envoy; eloped with a Frenchman; and has been rattling around the salons of Paris ever since. Widowed for four years, she entertains herself by drinking too much champagne, holding a weekly salon, and loudly critiquing Augustus’s poetry.

As Napoleon pursues his plans for the invasion of England, Whittlesby hears of a top-secret device to be demonstrated at a house party at Malmaison. The catch? The only way in is with Emma, who has been asked to write a masque for the weekend’s entertainment.

Emma is at a crossroads: Should she return to the States or remain in France? She’ll do anything to postpone the decision-even if it means teaming up with that silly poet Whittlesby to write a masque for Bonaparte’s house party. But each soon learns that surface appearances are misleading. In this complicated masque within a masque, nothing goes quite as scripted- especially Augustus’s feelings for Emma (summary from Goodreads).

I read this book in a matter of hours. It was fast paced, interesting, and much to my surprise, I loved the romance. Thank the lord that Augustus didn’t speak in rhyme throughout the novel otherwise I might have abandoned it. I had no idea what his background was but when I read his parts I found my self feeling so sorry for him. He had been in the field undercover for ten long years. That’s ten years of not knowing who you can trust and not having any true friends, not to mention losing yourself within your cover character. This sounded so lonely and tragic to me. I immediately wanted to comfort him.

Emma was frivolous and inmate at times however that was all a facade, similar to Augustus. But what I think I loved the most was the unrequited love angle. I thought the best line in the book was ‘Cytherea is only Cytherea because she doesn’t leave the tower’. Augustus fancied himself in love with his ‘muse’ Jane, and put her up on this pedestal all the while ignoring Emma. But little did he know that he and Jane would not make a fitting couple in the long term and what he needed was right in front of his face in Emma.

It is Emma is sets him straight about his infatuation with Jane and when Augustus eventually becomes interested in Emma, as a reader I questioned his intentions the same as Emma. It would take a lot of winning over in order for me to believe that Augustus wasn’t really in love with Jane but rather in love with Emma, and Willig delivered that in this romance.

I enjoyed watching the drama unfold between the odd love triangle. It was heartbreaking but at the same time so tender and real that I couldn’t help but completely fall in love with the two characters. Who hasn’t been in Augustus’s spot before? Longing for a crush that you think will be the perfect match for you, only to have your rose colored glasses taken off and seen them for what they really are? Unsuited for you. This was a very relatable story for many readers.

The poetry I could have done without all together…..sorry I am just not a poetry person, but everything else was on point. I loved that other long time favorite characters got more page time in this book (Jane and Miss Gwen) especially since we are coming to an end of this series.

I am looking forward to seeing how this series wraps up with only a couple more books left.

Book: The Garden of Intrigue (Pink Carnation #9) by Lauren Willig

Memorable lines/quotes: Cytherea is only Cytherea because she doesn’t leave the tower

2 thoughts on “Review: The Garden of Intrigue (Pink Carnation #9) by Lauren Willig”