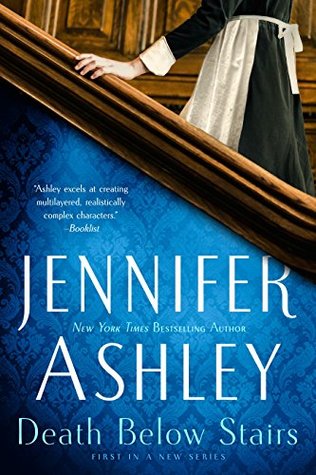 This book kept hoping up all over my Twitter feed and I had my eye on it for so long. I had been searching for something a little different from the usual high society murder mystery series.

And this looked like the perfect combo, cook from a big house tuned sleuth…sounds intriguing. So I was thrilled when I got the chance to review an early copy!

Highly sought-after young cook Kat Holloway takes a position in a Mayfair mansion and soon finds herself immersed in the odd household of Lord Rankin. Kat is unbothered by the family’s eccentricities as long as they stay away from her kitchen, but trouble finds its way below stairs when her young Irish assistant is murdered.

Intent on discovering who killed the helpless kitchen maid, Kat turns to the ever-capable Daniel McAdam, who is certainly much more than the charming delivery man he pretends to be.

Along with the assistance of Lord Rankin’s unconventional sister-in-law and a mathematical genius, Kat and Daniel discover that the household murder was the barest tip of a plot rife with danger and treason—one that’s a threat to Queen Victoria herself (summary from Goodreads).

Ok so yet again I feel like I gained 10 pounds just reading this book. There were a lot of foodie references and I found myself constantly hungry while I was reading this book….ironically by the end though I felt like I could be Gordon Ramsey and whip up quite the feast. Not sure why but for some reason every time I put a bookmark in, I walked away feeling like I could slay my kitchen!

That said, there were a lot of references to food which may or may not work for all readers. Personally I didn’t mind but sometimes I felt like the author was trying a little too hard to remind us that Kat was a cook.

The thing that didn’t work for me in this book was I felt like I got dropped into this complicated back story without any way of navigating. Clearly Kat and Daniel had a history. A complicated history. One that includes Kat having been in-prisoned, that was never really fully explained or explored. That bothered me. I gather that at some point we will know more but having left these big questions marks only slightly addressed bothered me.

I almost felt distrustful of the narrator/protagonist because some things were mentioned, roughly addressed, but never fully explained. I also didn’t know how I felt knowing so little of Daniel. I suppose that was the intention of the author….make the audience just as hesitant to trust him as Kat is, but for me it just rang shallow. I needed to know at least a little more about him before the book was over.

I also expected more heat from this author. She’s written quite a few romance novels and many of which look quite provocative, so just based on what little I knew of her other books, I expected there to at least be a little more romance between Kat and Daniel. Maybe not a bodice ripper per say, but something a little more than just a kiss here and there….some sexual tension at least. In that regard I was little disappointed.

The mystery starts as a murder mystery and somehow becomes more about Ireland and treason….it’s not a bad transition really, but there was just a lot going on in the mystery parts. I would have liked to have more of the focus be on the murder rather than getting off on a tangent.

That said, I liked this novel quite a bit all criticism aside. It was fun and I liked the perspective of a worker rather than the upper class. I loved the quirky cast of household characters and I will be interested to see where Kat and Daniel’s romance goes from here.

I especially want to know more about the backstory which it sounds like we will learn more in the upcoming novels in this series…..at least I hope!

One thought on “Review: Death Below Stairs (Kat Holloway Mysteries #1) by Jennifer Ashley”