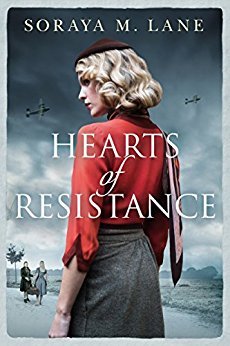 This if my first official book of 2018….the first one that I read and reviewed this year. I read Lane’s earlier novel, Wives of War, back in June and was really impressed with her ability to write interesting characters and a romance that I was invested in.

When Hearts of Resistance came up, it was an easy yes for me to review and I was thrilled to read it and see how Lane’s writing grew in the next book and what sort of romance was in store.

At the height of World War II, three women must come together to fight for freedom, for the men they love—and for each other.

When Hazel is given the chance to parachute into Nazi-occupied France, she seizes the opportunity to do more for the British war effort than file paperwork. Alongside her childhood friend, French-born Rose, she quickly rises up the ranks of the freedom fighters.

For Rose, the Resistance is a link to her late husband, and a way to move forward without him. What starts out as helping downed airmen becomes a bigger cause when they meet Sophia, a German escapee and fierce critic of Hitler who is wanted by the Gestapo. Together the three women form a bond that will last a lifetime.

But amid the turmoil and tragedy of warfare, all three risk losing everything—and everyone—they hold dear. Will their united front be strong enough to see them through? (Summary from Goodreads).

This time we meet very different female leads than we did is her earlier book. Often women were only allowed to help the war effort as nurses, but in this novel the women we meet are practically daredevils…..parachuting into occupied France? Badass. Rose and Hazel were awesome. I loved their pluck and courage.

Sophia was also an interesting female lead, she was brave and courageous in her own way. Speaking out agent Hitler, and a woman to boot, would have been beyond embarrassing for the Nazi regime. I think for me her story was the most compelling because she would likely have been in the most danger. Yes helping rescue down airmen would have been dangerous as well, but Sophia was speaking out against Hitler deep in Nazi territory….the threat to her wellbeing was very real and made her story the most interesting for me.

Even though these three women were ‘fictional’ they had a ring of authenticity in their stories and characters. I love books with strong women at the forefront and even though this was a fictional book, their bravery and spunk shined without seeming fake or made up. I love that about Lane’s writing. She has a wonderful ability to create well thought out characters with memorable stories.

Like her previous book, the romances formed quick and moved at a fast pace. Some might prefer a slow burn romance in war time books but for me I love the ‘whirlwind’ feel in this book. To me war time romances should be more whirlwind because who has time to wait when you are getting shot at and taking risks with your life? When I encounter ‘slow burn’ war romances they frustrate me. So while some felt that the romances in this book were too fast, I happened to like it and felt that it was very fitting.

Overall this was a well written book and I loved how the three main characters were such strong women with believable stories. I would recommend this book to anyone who loves war romances and strong women who don’t backdown from challenges. Inspiring!

This was a great book to kick off my new year reading! Don’t miss this one!