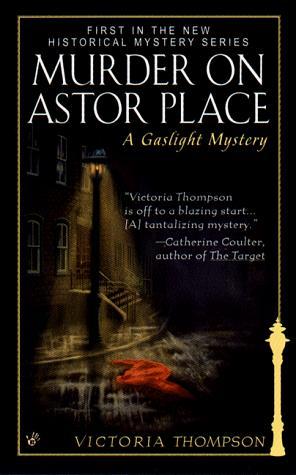 My mom has been after me for years to read this book series. She has repeatedly send me copies of this book via inter district mail on a regular basis and then constantly asks me when I am going to start reading it.

The series has also continued to pop up on my Goodreads recommended books page as well, so yes I had this book series on my TBR list for quite some time. I love all things gaslight and was excited when an opportunity arose that I could start it now rather than ‘someday’.

Mother dear, AKA my biggest fan, should be thrilled to see this one is being reviewed finally!

After a routine delivery, midwife Sarah Brandt visits her patient in a rooming house and discovers that another boarder, a young girl, has been killed. At the request of Sergeant Frank Malloy, she searches the girl’s room, and discovers that the victim is from one of the most prominent families in New York and the sister of an old friend.

The powerful family, fearful of scandal, refuses to permit an investigation. But with Malloy’s help, Sarah begins a dangerous quest to bring the killer to justice, before death claims another victim (summary from Goodreads).

So first things first, I enjoyed reading this one and found the mystery exciting and interesting as well as the resolution. I didn’t bother reading the description myself because I know based on title alone that this would be something I would enjoy. I probably should have read it though because I was a little disappointed that it was based in New York rather than London, but ultimately in the grand scheme of things, the location was moot and didn’t really feed too much into the over all story.

This was not just a murder mystery but also a story about socioeconomics which I thought added a lot to the mystery. Thompson must have gone through a TON of etiquette research to get the details just right. I can tell she made a huge effort in her reach which added authenticity to the overall book.

I was a little disappointed that there wasn’t more romance or chemistry between Malloy and Sarah. I understand this is a fairly long series (21 works and counting) so I am guessing that Thompson’s goal was a slow burn romance rather than a romance that plays out in one book over one singular mystery. I am excited to see where that goes in future books.

The only thing that bothered me a little with this book was Sarah. She came across so headstrong and sure of herself in the early chapters of the book, but then when Malloy acquiesces to her being involved in a more official capacity, she starts to doubt herself and makes silly mistakes that I felt like her character just wouldn’t. I personally felt like it was out of character for her to be like ‘wait am I doing this right’ and question herself. I felt like she was confident enough that she wouldn’t question what she was doing or admit being ‘stuck’. That just didn’t fit with her character for me so I felt frustrated by that aspect of her character.

Overall though, the mystery was satisfying and I am looking forward to reading more books in the series. I don’t know that I am as ‘on fire’ for them as I was with some other historical mystery/romances that I have read, but I am intrigued and invested enough in the characters to keep reading the series.

As always……dear mother knows me so well. Thanks for the recommendation and the mail bombardment!