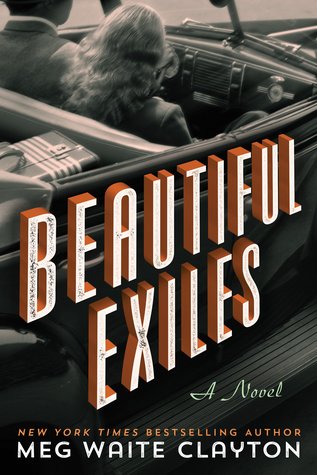 I watched this absolutely wonderful HBO miniseries called Hemingway and Gellhorn in 2012. I had major movie hangover after watching it. IMBD users didn’t seem to like it as much as I did, but for whatever reason this movie just resonated with me and I was fascinated by this couple I knew nothing about.

I knew that Hemingway was moody and an all around asshole but that he wrote beautifully. Full disclosure, I haven’t read a single Hemingway book—-but I’ve read enough Hemingway quotes to discern that he’s a brilliant writer.

The person I didn’t really know much about though was Martha Gellhorn. In the film she seemed like a cross between Lois Lane and a salty bitch—so naturally, I was intrigued by her. When this book came up for review, I was excited to read it, especially because it appeared to focus mostly on her.

Key West, 1936. Headstrong, accomplished journalist Martha Gellhorn is confident with words but less so with men when she meets disheveled literary titan Ernest Hemingway in a dive bar. Their friendship—forged over writing, talk, and family dinners—flourishes into something undeniable in Madrid while they’re covering the Spanish Civil War.

Martha reveres him. The very married Hemingway is taken with Martha—her beauty, her ambition, and her fearless spirit. And as Hemingway tells her, the most powerful love stories are always set against the fury of war. The risks are so much greater. They’re made for each other.

With their romance unfolding as they travel the globe, Martha establishes herself as one of the world’s foremost war correspondents, and Hemingway begins the novel that will win him the Nobel Prize for Literature. Beautiful Exiles is a stirring story of lovers and rivals, of the breathless attraction to power and fame, and of one woman—ahead of her time—claiming her own identity from the wreckage of love (summary from Goodreads).

One of the things that I was most interested in with this novel was the power play between the two characters. Both were rising literary stars and both had egos to contend with. The attraction between the two was undeniable and yet their passion for writing and their careers, eclipsed their relationship. I was curious to see how that played out in this retelling of their love story. The author had big shoes to fill when it came to these two characters. I think that Clayton rose to the occasion beautifully.

Clayton chose to focus more on the love story between the two for this novelization of two real people and I think that’s what made it work. I think had she tried to incorporate more of their actual work, then it wouldn’t have worked as well. If that was the case she might as well have written a biography. So I like that Clayton went more with the romance part.

The chemistry between Gellhorn and Hemingway is great in this novel. It’s a delicate balance of highly charged sexual tension and tender romance and I think that Clayton stayed true to that piece of their love story.

The one thing I was disappointed in was the portrayal of Gellhorn. In real life, she was this strong, independent woman who wanted recognition of her abilities in her own right. She was bold as brass and a fighter if I ever saw one. That was ultimately what drew Hemingway to her. In many ways I think Hemingway looked at her and saw himself….and perhaps he was right. However in this book that part of her personality is down played quite a bit which I found disappointing.

Novelizations are so tricky. On one hand this is a fictional account of their lives but yet its based on real life events so how much of whats depicted on the pages are the ‘real characters’ and how much of the characters are downplayed or changed to suit the author’s vision? In this case I think there is a reasonable amount of creative license when it comes to Gellhorn’s character—though I could be wrong, as I am clearly not an expert on Marth Gellhron.

For me, this book was a 3.5 star. Clayton nailed the chemistry and romance but when it came to Martha, her character seemed out of place for what I knew of her.

As a final note…..I can’t believe Gellhorn married him. She should have known better! She’s a smart women, she should have seen that scenario coming a mile away.