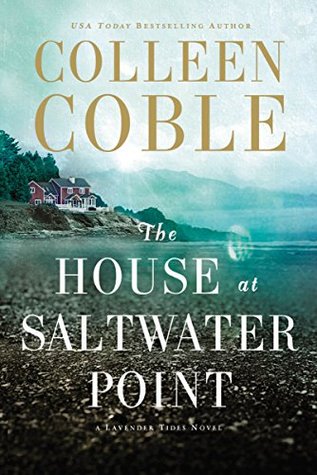 I like books with interesting mysterious titles. This book, in combination with the cover, said mystery to me. I love the dark, brooding colors and scenery on the cover of this book and in many ways, it reminded me of a more modern Mary Stewart novel, so I was eager to read it.

Ellie Blackmore is making a name for herself as a house flipper. But when her sister Mackenzie disappears, Ellie can’t focus on anything but uncovering what happened. Her only clue is the bloodstain on the deck of Mackenzie’s boat. Ellie knows her sister isn’t on the best of terms with her ex-husband, Jason, but he wouldn’t kill her—would he?

Coast Guard intelligence officer Grayson Bradshaw believes Mackenzie faked her own death after stealing a seized cocaine shipment. The problem is convincing Ellie, who seems to view him as the true enemy.

Both Ellie and Grayson want truth, but truth—and family—is often more complex than it first appears. From international terrorism to the peaceful lavender fields of Puget Sound, The House at Saltwater Point is a thrilling race to uncover the truth before it’s too late (summary from Goodreads).

Had I not known that this was a Christian novel, I wouldn’t have been able to tell. There were a few ‘I’ll pray for you’ phrases and ‘while I was at church’ moments, but it all fit into the context of the story so it wouldn’t have tipped me off had I not known. So I think even people who aren’t Christian fiction fans would like this book because it isn’t overly preachy or anything.

This book read very quickly. I read it in a few days and had fun falling into the Lavender Tides community. This is also the second in a series…..I would never have guessed that. It reads totally fine as a standalone novel so if you are worried you will be lost…..I wasn’t in the least!

The characters were interesting and unique. I liked how Ellie is a carpenter and has this tragic past but she continues to peruse her dreams and be as happy as she can be. Grayson had a similar past and I loved them together as a couple. While their romance was a little predictable, I still enjoyed it.

The mystery angle was also interesting. Far fetched—but interesting all the same. There were times when I found the mystery so far fetched that it was hard to believe yet for some reason I didn’t completely hate it. I loved that there was this kind of definitive proof that Grayson held onto, but even with that proof, Ellie still stood by her sister. With that definitive proof in hand, it made the mystery element much more intriguing in my opinion, because here is proof of guilt yet is it really? I won’t give any more away than that but let’s just say it worked for me in a odd sort of way.

While I loved most of this book, there were things that were a little distracting for me. There seemed to be a few too many super heavy plots going on in this book. Again I won’t giveaway too much, but everyone literally has this horrible tragic story and there just seemed to be too many for me to focus on. I think one would have been plenty and the mystery angle was a little far fetched but for some weird reason it wasn’t completely off putting.

Overall this was a fun read for me. I read it while on vacation at the Oregon Coast so that made it a little more fun and realistic for me. I wouldn’t mind revisiting Lavender Tides again now that I’ve enjoyed this book so much!

3 thoughts on “Review: The House at Saltwater Point (Lavender Tides #2) by Colleen Coble”