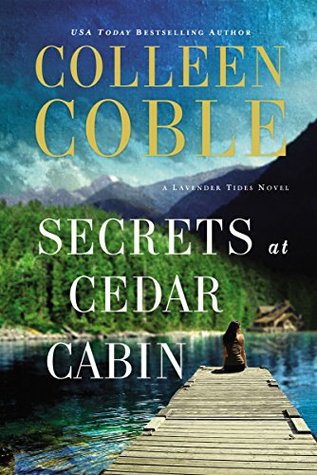 I read one of Colleen Coble’s romantic suspense novels back in August 2018. It was the second book in the Lavender Tides series and I thought it was a really fun read and was eager to read more about this Pacific Northwestern coastal town.

Being from Oregon and loving the Oregon coast, is what initially drew me to this author. I love when places that I know and love are featured in books. Even though Lavender Tides is a fictional city, the descriptions of this little town are vivid and could easily be any Washington or Oregon coastal town.

Coble’s writing is suspenseful and thoughtful with the romance sharing the spotlight with the mystery rather than taking over the story itself, so when this third installment came up for review, I was happy to agree!

Six months after her wedding, Bailey Fleming discovers she wasn’t really married to Kyle Bearcroft. He’s already married to another woman and seems to be involved in a shadowy underworld. Kyle tries to pay her off by putting a cabin located in Lavender Tides, Washington, in her name. She doesn’t plan to accept his bribe but ends up fleeing there after her mother is found murdered and an attempt is made on her life too. Bailey was hoping for a quiet place to figure out who is after her, but she finds the cabin filled with secrets and even more danger.

FBI agent Joe Phoenix has been watching Cedar Cabin in hopes of bringing down a trafficking ring, one he believes has taken his younger sister. He doesn’t know what to make of Bailey’s sudden appearance. Is she part of the trafficking ring or someone he needs to protect? When the danger at Cedar Cabin increases, they have to join forces to save Bailey from the man who would do anything to keep a past murder buried, and to expose a trafficking ring that has enslaved young women, including Joe’s sister.

The investigation is further complicated when Bailey discovers nothing in her life is as it seems—not even her own identity. Everything points back to an earthquake on the day she was born, but why? With lies coming at her from every direction, can she trust anyone, even Joe? (summary from Goodreads).

One of the things that I love about Coble, is that she doesn’t shy away from provocative mystery storylines. In the book I previously read, the mystery had to do with terrorism and drugs and this book’s mystery is about human trafficking. As a Christian writer, I would normally expect a more conservative mystery line, but she boldly steps out and writes with confidence about a difficult topic.

I also love that with this series, you don’t have to read the previous books in order to keep up with the story. Each one reads just fine on it’s own, the thing that draws them all together is the setting rather than reoccurring characters in the larger narrative. The other characters from previous books make appearances inch book, but they do not necessarily play a huge roll in the main narrative of each story—if that makes sense.

While Coble is a wonderful suspense/mystery writer, she is also a very good romance writer. I loved the romance in this book almost more than the second one. Bailey and Lance are both likable characters and their romance was more of a slow burn for me. In this book the romance wasn’t as big of a role within the story, but it was clear that Bailey and Lance had feelings for one another and watching their romance evolve was satisfying and genuine which made me really love their story.

This book was a great conclusion to the series. While there were elements in this book that seemed at first unbelievable, for example how Bailey ended up in Lavender Tides seemed almost a little too ironic, but I thought Coble did a great job tying everything together and explaining how and why she ended up just where she needed to be.

Kindle Edition, 336 pages
Published January 22nd 2019 by Thomas Nelson
ASIN B07BB5C4M7
Free review copy provided by the publisher, Thomas Nelson, as part of the TLC virtual book tour, in exchange for an honest review. All opinions are my own and are in no way influenced.
Rating: 4 stars

Tuesday, January 29th: By the Book

Wednesday, February 13th: Diary of a Stay at Home Mom

Friday, February 22nd: What is That Book About