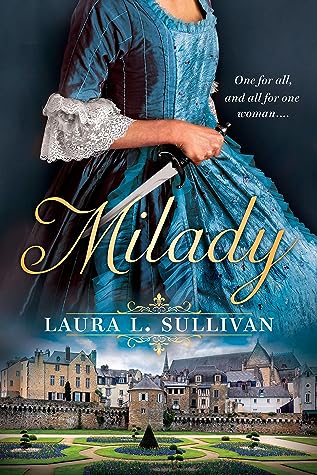 I loved the 1993 film version, even if I did hate Charlie Sheen and Chris O’Donnell in it, it was still exciting and as a young girl who longed for grace adventures, it had everything I could hope for. Sword fights, friendship, and of course a bad ass femme fatale!

Oh how I loved Milady de Winter! She was one of the first female characters that stands out in my mind. She wasn’t a maid in need of rescuing, like Maid Marian in Robin Hood, she was the villain and she captured my imagination.

So when this book showed up for review on my desk, I squealed! I couldn’t believe someone wrote a novel from her perspective! I couldn’t wait to star reading it and crack it open almost immediately!

She was the greatest nemesis of d’Artagnan and the Three Musketeers–but Milady de Winter was so much more than just a villain in their swashbuckling adventures.

I’ve gone by many names though you know me as Milady de Winter: Villainess, seductress, a secondary player in The Three Musketeers story.

But we all know history was written by men, and they so often get things wrong.

So before you cast judgment, let me tell you of how a girl from the countryside became the most feared woman in all of Europe. A target for antipathy, a name whispered in fear or loathing.

I don’t need you to like me. I just need to be free.

It’s finally time I tell my own story. The truth isn’t tidy or convenient, but it’s certainly more interesting (summary from Goodreads).

For me, this book had to pack a big punch. It needed to come in swords blazing. I don’t know that it completely blew me over, but I thought it came in strong all the same. In my opinion, Milady de Winter is kind of a lesser known character/villain unless you are familiar with the Musketeers’ story. I only have a condensed, Hollywood ideal for reference and I think this novel would have had a greater impact if I had read the Dumas classic first.

I think one of the biggest struggles of this novel for me was the time shifting. The most interesting part of the book is Milady’s coming of age story, but it would awkwardly get broken up to shift back to Milady’s ‘modern’ story featuring the Musketeers. The change was only marked by a new date and for my, I kept having to go back and find what date I had been at in the previous chapter to orientate myself with the timeline.

At times I felt like Milady (or Clarice) was fiery and fierce but yet that didn’t translate into action. I often felt like Clarice was plotting and scheming but then things happened to her rather than her making those things happen if that makes sense. I didn’t feel like (at least in the beginning) that she every really got to execute her plans the way that she had plotted because outside characters or situations would limit her or interfere.

While these two things were a struggle for me, I did still love the book and the concept of her story. I found Clarice very relatable on a number of levels and I loved seeing her vulnerability especially as a young girl just coming to court for the first time. It was very evident that she would never make a typical courtier, but yet her innocents made her susceptible to more cutthroat courtiers. I think it’s in this part of the story that the author thrives and we get to see what Clarice could have been if she been in different circumstances.

Overall I ended up giving this book a 4 star rating. It was too unique and interesting to go with anything lower than 4 stars but the timeline switching was a bit of a struggle to bump it up to 5 stars.