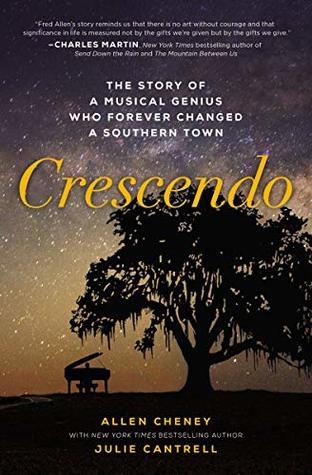 I kept putting it off and ultimately decided to wait and see how my July reading shaped up and promised myself that if I had some time, I would try and squeeze this one in.

My mom is a pianist and its always such treat to hear her play so I felt like in a way, I owed it to her to read this book even if it is non-fiction—a genre that I rarely read. Not to mention the title of the book is so pitch perfect as is the cover. The fact that I kept thinking about it and wondering if I should read it, told me everything that I needed to know. I needed to find a way to fit this one in.

More than eighty years ago, a musical prodigy with a brilliant mind was born into a poor, uneducated, and abusive family in rural South Georgia. At three years of age, Fred Allen could play Mozart sonatas on the piano without missing a note. But in spite of his obvious talent, Fred’s parents discouraged him from expressing his creativity and intelligence, even going so far as locking him away from the old piano in their home. Forced to fend for himself through his adolescent years, Fred knew that if he was ever to make something of himself, he would need to find a way to rise above his broken background. With incredible effort, and a few miracles along the way, Fred managed to do just that, eventually earning acceptance into The Julliard School in New York City. While simultaneously attending Juilliard, Union Theological Seminary, and Columbia University, he also began directing a local church choir, where he caught the attention of the music industry.

During the musical revolution of the 1960s, Fred earned numerous Grammy nominations and built a growing reputation within the industry. But just as his new career was beginning to take off, Fred was faced with an impossible decision. His wife announced that she no longer wanted to raise their daughter in New York City and was heading home to the South. Fred had come so far from the pain and brokenness of his past, he couldn’t imagine giving up everything just to return to his childhood home.

Trying not to think about what could have been, Fred took a job as a high school music teacher in his hometown of Thomasville, Georgia, a community of only 30,000 people. Far from the executive suites of RCA and the allure of Broadway, Fred never could have imagined that his new role would not only transform his life but also change an entire community forever (summary from Goodreads).

So so so many five star reviews for this book are popping up all over the place and I can absolutely see why! While so many non-fiction books are filled with dates and facts, this book has that but it also has a heart and a soul that captures readers from the very beginning.

I instantly knew I was reading something special and knowing that Fred and Winnie’s story is a true story made it even more heart warming and special. All too often it’s easy to forget a great story that is fictional for the simple reason that it is fiction. I know that I often read a stunning story and wish that it has been true and feel a pain when I remember that it isn’t. Well this book and its story are true and it makes me so happy to know that.

This is a lovely uplifting story that you will continue to come back to and find something to love. I know that in the days that followed as I finished this book, I was constantly thinking back to Fred and all the love that I found in the pages. Having worked in a high school for years, I know how important the arts are so many students and this book highlighted that for me.

While this book isn’t a fast paced fictionalized account of Fred and Winnie’s story that I am normally used to when it comes to reading, there is still so much heart and soul in this book. I agree with every single 5 star review. This book gets all the stars from me that’s for sure!

One thought on “Review: Crescendo: The True Story of a Musical Genius Who Forever Changed a Southern Town by Allen Cheney and Julie Cantrell”