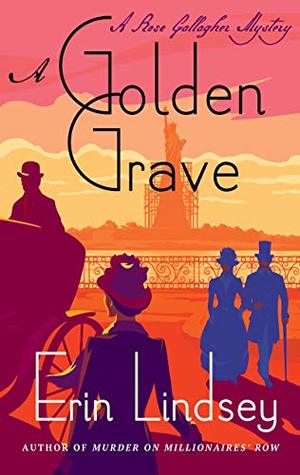 I read the first book in this historical mystery series, Murder on Millionaires’ Row, back in 2018 and thought it was a solid beginning to her new series.

This author has written other fantasy novels but the Rose Gallagher series is a new genre for her and I thought she made a nice transition but I wasn’t completely sold on the series as there were some things that I thought needed a little working out and polishing.

While I had some reservations, I know that the transition from fantasy to historical fiction can be challenging so I decided to give this series another stab and see how things evolved with this latest installment.

Rose Gallagher always dreamed of finding adventure, so her new life as a freshly-minted Pinkerton agent ought to be everything she ever wanted. Only a few months ago, she was just another poor Irish housemaid from Five Points; now, she’s learning to shoot a gun and dance the waltz and throw a grown man over her shoulder. Better still, she’s been recruited to the special branch, an elite unit dedicated to cases of a paranormal nature, and that means spending her days alongside the dashing Thomas Wiltshire.

But being a Pinkerton isn’t quite what Rose imagined, and not everyone welcomes her into the fold. Meanwhile, her old friends aren’t sure what to make of the new Rose, and even Thomas seems to be having second thoughts about his junior partner. So when a chilling new case arrives on Rose’s doorstep, she jumps at the chance to prove herself – only to realize that the stakes are higher than she could have imagined. Six delegates have been murdered at a local political convention, and the police have no idea who–or what–is responsible. One thing seems clear: The killer’s next target is a candidate for New York City mayor, one Theodore Roosevelt.

Convinced that something supernatural is afoot, Rose and Thomas must track down the murderer before Roosevelt is taken out of the race–permanently. But this killer is unlike any they’ve faced before, and hunting him down will take them from brownstones to ballrooms to Bowery saloons. Not quite comfortable anywhere, Rose must come to terms with her own changed place in society–and the fact that some would do anything to see her gone from it entirely (summary from Goodreads).

I recall from the previous book that Rose’s mysteries had more of a paranormal element. While it didn’t work as well for me in the first book, I found that it worked way better in this second book. I don’t know if that’s due to the fact that I was expecting it in this book whereas with the first book I wasn’t expecting it, but either way I found the supernatural worked much better here.

In this book Rose has made the transition from housemaid to Pinkerton agent and I like her much better as an agent. I think the role suits her much better than housemaid. In this book I felt a more solid connection to her character that I didn’t feel in the first book. I also like seeing how she starts to find value in her future self and accomplishments.

I especially loved watching the growth and tension between Rose and her partner, Thomas. I am ken more eager to see how they come together in future books. I thought their relationship added a lot of chemistry and tension to the overall story and I enjoyed it quite a bit. The one thing that stood out to me in this book was how much more polished and thought out the characters were. I felt like we see a lot of character growth in this book compared to the first.

This is only the second book and I am sure that there will be a lot more exciting things to come for Rose and Thomas and this book makes me eager to find out more, unlike the first book which left me satisfied but not craving more—this book left me craving more. I enjoyed watching the mystery unfold and found it tantalizing and mysterious. I didn’t know what to make of some of the clues and couldn’t help but get caught up in the ‘hunt’. This book can easily read as a standalone, but I am happy that I read the first book so I could appreciate the evolution of the characters more in this one.

One thought on “Review: A Golden Grave (Rose Gallagher #2) by Erin Lindsey”