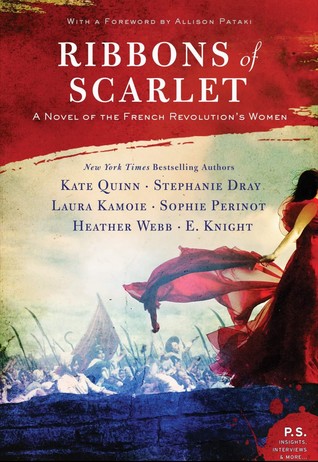 Epic was the first thing that I thought of when I saw this book. There are six different writers in this book and that fact alone suggests that this book was going to have a huge scope. But to be honest, the amount of authors that contributed to this book, made me a little nervous.

There are a number of powerhouse writers here and all of them independently successful and excellent authors, but how would their varying styles work together and mesh into one novel?

That was my biggest hold out on this one. I know that many of these same authors have collaborated together to write multiple other works—but I haven’t read any of those other works so I was slightly nervous taking this one on, but I was so curious about the time period they would be exploring and I curiosity got the better of me.

Six bestselling and award-winning authors bring to life a breathtaking epic novel illuminating the hopes, desires, and destinies of princesses and peasants, harlots and wives, fanatics and philosophers—six unforgettable women whose paths cross during one of the most tumultuous and transformative events in history: the French Revolution.

Ribbons of Scarlet is a timely story of the power of women to start a revolution—and change the world.

In late eighteenth-century France, women do not have a place in politics. But as the tide of revolution rises, women from gilded salons to the streets of Paris decide otherwise—upending a world order that has long oppressed them.

Blue-blooded Sophie de Grouchy believes in democracy, education, and equal rights for women, and marries the only man in Paris who agrees. Emboldened to fight the injustices of King Louis XVI, Sophie aims to prove that an educated populace can govern itself–but one of her students, fruit-seller Louise Audu, is hungrier for bread and vengeance than learning. When the Bastille falls and Louise leads a women’s march to Versailles, the monarchy is forced to bend, but not without a fight. The king’s pious sister Princess Elisabeth takes a stand to defend her brother, spirit her family to safety, and restore the old order, even at the risk of her head.

But when fanatics use the newspapers to twist the revolution’s ideals into a new tyranny, even the women who toppled the monarchy are threatened by the guillotine. Putting her faith in the pen, brilliant political wife Manon Roland tries to write a way out of France’s blood-soaked Reign of Terror while pike-bearing Pauline Leon and steely Charlotte Corday embrace violence as the only way to save the nation. With justice corrupted by revenge, all the women must make impossible choices to survive–unless unlikely heroine and courtesan’s daughter Emilie de Sainte-Amaranthe can sway the man who controls France’s fate: the fearsome Robespierre (summary from Goodreads)

I don’t think I have ever read a novel like this before—if you are looking for a truly unique reading experience, then this is the book for you. Was there a lot going on—-YES. But was it a mess—absolutely NOT. With six people writing seven different narratives/POVs to form one larger story, I was so fearful that it would be confusing and that I would be lost and overwhelmed but I really wasn’t. I was so impressed each author’s contribution and perspective and marveled at the way this one came together.

While this book is a historical read, it was so well written that I forgot I was reading a history book rather than a fictionalized account of a character or historical figure. Each woman was so intriguing that I often found myself Googling them and wanting to know so much about each one and the best thing about each character was their experience was so different from the next woman and it kept things interesting.

The only thing I felt a little torn about was the fact that each woman’s story was condensed which left me wanting to find out so much more about each woman, but also gave me enough to enjoy the larger story. I think each of these women could have had their own full length book but my guess is that it was done this way to help conserve space.

I found that I had to slow down with this one to savor it. I didn’t want to rush it, but rather savor each story along the way. The subject matter wasn’t fluffy—in fact it was a little heavier than I was anticipating but I thought the writing each author provided was critical to the enjoyment of the subject.

This was an excellent read and I relished picking it up each night. I love the time period and the background and history provided in this book but the history was told with such elegance and ease from each author that I found myself devouring it as often as I could even though I promised myself I would savor it! Well done ladies—-well done this was an impressive undertaking!

ebook, 400 pages
Expected publication: October 1st 2019 by William Morrow & Company
Free review copy provided by publisher, William Morrow, in partnership with Tall Poppy Writers/Bloggers in exchange for an honest review. All opinions are my own and no way influenced.
Rating: 5 stars
Genre: history