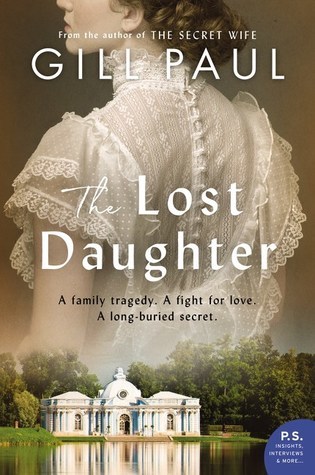 I read one of Gill Paul’s novels last year and loved it. I was so excited to see that she was writing a novel about the Romanov family that was coming out in August. Rather than pick up one of her other novels, I decided to hold off and wait for this one to come out.

The Romanov tragedy is fascinating to me. It’s one of the greatest tragedies in modern history, but while I am fascinated by it, I haven’t actually read a lot about the family and the history or politics of the time.

This was one of the big reasons I was looking forward to this one. While it’s a fictionalized account of the family, I knew there had to be a lot of history intertwined in this one so I was eager to start it. I didn’t even read the summary when I saw it, I just say that it was about the Romanov family and written bu Gill Paul, I didn’t need to know anymore than that.

Summer 1918: Pretty, vivacious Grand Duchess Maria Romanova faces an uncertain future. The nineteen-year-old daughter of the fallen Tsar Nicholas II, she now lives with her family in suffocating isolation, a far cry from their once-glittering royal household. Her days are a combination of endless boredom and paralyzing fear; her only respite is a clandestine friendship with a few of the guards imprisoning the family—never realizing her innocent flirtations could mean the difference between life and death.

1973: When housewife Val Doyle hears her father’s end-of-life confession, “I didn’t want to kill her,” she’s stunned. So, she begins a search for the truth—about his words and her past. The clues she discovers are baffling—a jewel-encrusted box that won’t open and a camera with its film intact. What she finds out pulls Val into one of the world’s greatest mysteries—what really happened to the lost Romanov daughter? (summary from Goodreads)

As I said, I didn’t read the summary in it’s entirety. I just saw Romanov and started to read it. I actually thought with a title like ‘the lost daughter’ it would be about one of the more famous daughters, Anastasia, but it wasn’t. It was actually about Maria. The murder of the family actually happened in the first third of the book and the moments/months leading up to the death of the family were written so vividly and with such emotion, that I had to put the book down for a while after reading that section. My heart just hurt for that poor family, especially the small children. Paul is a powerful writer and I thought she did a fantastic job at that focusing on those months leading up to the murders.

While this part was only a small part in the story, it was really powerful and set the tone for the entire book and once my heart healed I was able to pick this book up again and devour it! I loved the alternating time periods in this book and the switches really kept things moving and me reading. I don’t know that I loved Val’s character (the modern character), but I liked the way that the author balanced the past with the present.

I know that a lot of other reviewers felt like this book packed an emotional punch and it left them reeling. I completely agree. This book packed so much more motion than the other novel I have read by her. This book was so emotional and well written and she should be commended for creating such a rich and powerful story. I adored this one.

One thought on “Review: The Lost Daughter by Gill Paul”