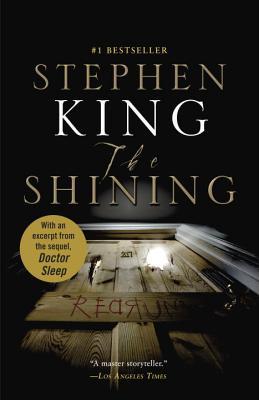 Every year my sister and I pick a scary book for October and do a buddy read. Last year we did Frankenstein and we both hated it so much that we both DNF!

This year we vowed to pick something better. We tossed around a few options but ultimately settled on this classic horror novel by the king of horror Stephen King himself.

Neither of us have read King before so we thought this one would be a good starting point. Wait—I take that back. I started reading The Gunslinger and I had no idea what was going on so I stopped reading it so I don’t count that as a ‘read’ King book. Anyway, The Shining is such a classic film and book (we haven’t seen the film yet either!) in pop culture and we both agreed that starting with this one would be a good option.

Jack Torrance’s new job at the Overlook Hotel is the perfect chance for a fresh start. As the off-season caretaker at the atmospheric old hotel, he’ll have plenty of time to spend reconnecting with his family and working on his writing. But as the harsh winter weather sets in, the idyllic location feels ever more remote . . . and more sinister. And the only one to notice the strange and terrible forces gathering around the Overlook is Danny Torrance, a uniquely gifted five-year-old. (summary from Goodreads)

This book was so strange for me. I literally hated everyone in this book but yet I couldn’t put it down. Was is dark and twisted? ABSOLUTELY! Did I want to stop reading? YES all the time! Could I actually stop? Hell no, I was up so late reading it on a regular basis! This was seriously the strangest book and it will stay with me for a long time.

First of all, Jack Torrence has got to be one of the most hated literary figures of all time. I hated his guts with a passion. I have a small boy (3 years old) and reading about how Jack broke Danny’s arm when he was 3 years old had my mommy heart breaking. I almost put the book down at that point because it was just too hard and sad to read. But I kept reading to see if he got any better. Absolutely not. But again, I couldn’t stop myself from reading this book! I actually felt like Jack with the scrapbook with this actual book because I couldn’t stop reading!

Wendy was awful. If I were her, I would have left his ass the second he laid a hand on our kid, but she stayed with him. I think one of the things that really stood out to me reading this book were all the stereotypical characters. When I say stereotypical I mean of the time period. This book was written and is set in the late 1970s and it absolutely shows in this book. Wendy was your typical housewife who relied desperately on her husband—a far cry from the 2019 modern women almost forty years later. There were many little things like that that stood out to me. It was really fascinating for me to read since I was born in 1981 and my mom was a typical stay at home mom when I was growing up, so reading this book made me think about that quite a bit.

Was this book scary—-yes. I was creeped out reading it on many occasions. I think the scariest part for me was when the elevator turns on in the night. I would have been like we are out of here! It was intense but it was actually more puzzling for me than terrifying at times. The whole time I was like what is up with this hotel?!

I can see why King is literally the king of this genre. I am also excited to read more of his books because even though they are uncomfortable, they are brilliantly written and held my interest and will be books that will stay with me just like a ghost! However, I don’t know that I really liked this book at all which is what makes this one so incredible hard to rate and review. If I was going on my comfort level in regards to characters and content I would have given this book 1-2 stars but the depth and scope of the characters and hotel as well as the writing was easily 5 stars—-especially when you consider the time it was written in. This would have been a huge success and undeniably controversial for the time period so that had to factor into my review as well. In the end I just had to go with 4 stars because I couldn’t put it down no matter how much I wanted to!

Side note, I have not seen the movie but the Jack Nicholson version uses Timberline Lodge as the exterior of The Overlook and Timberline Lodge is located at the base of Mt Hood (about 2 hours from me) and a place I have visited often! Love that hotel!

One thought on “Review: The Shining by Stephen King”