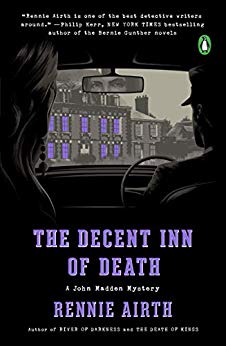 This series and author are completely new to me and I went into this one with zero expectations.

When the book arrives in the mail, I was immediately drawn to the cover. It has a real noir/crime feel to it and I was eager to read a mystery that was a little different, such as the cover implied.

It is the 6th book in a series though so I had to go into it with an open mind. I mean at a certain point in a series, readers have to expect that there will be established storylines and character relationships to some degree or another, so with that in mind, I picked this one up to check out.

Snowed in at a country manor, former Scotland Yard inspectors John Madden and Angus Sinclair find themselves trapped in the company of a murderer.

On a trip into Winchester, former chief inspector Angus Sinclair learns of a tragedy that has taken place in the village he is staying in. Beloved church organist Greta Hartmann has slipped and fallen to her death in a shallow creek, and while investigations conclude it to be an accident, her friend and housemate, Vera, remains unconvinced. After learning that Greta was the widow of a prominent anti-Nazi German preacher, Sinclair meets with the distraught Vera, and he resolves to dig deeper into the story. His investigations lead him to the stately manor of Julia Lesage, where she lives with her devoted staff that includes her secretary, cook, and driver. Though confined to a wheelchair, Julia is an electrifying spirit with a sharp wit, and those who know her adore her. Among those who do, a gentleman with dubious business dealings is also staying at the house–and Julia appears to be in love with him. A blizzard hits, keeping Sinclair, and later Madden, on the grounds with little to do but analyze the case of Greta’s death, until a murder takes place, and everyone becomes a suspect. (Summary from Goodreads)

So this one read more like a country house murder mystery than a crime novel or a police procedural. The cover really suggested something different to me than what the book actually was, but ultimately that was ok. I mean what do they always say—don’t judge a book by it’s cover! While this might not have been the ‘noir crime novel’ that I was expecting, it was still good.

I enjoyed trying to ferret out all the red herrings and the constantly changing list of suspects. There was a lot to keep readers guessing and I can tell that the author is practiced in the art of story telling and detection. There were lots of details in the writing and the story to keep me interested and invested in the story until the end.

But I wouldn’t say that it ‘grabbed me’ from the beginning—in fact it took me a little bit to get into this one. While there was a lot of details in the plot and writing, there were times that I felt it was a little overkill, especially in the dialogue which bogged down the overall story for me in places. I mean it wasn’t horrible and I enjoyed the mystery just fine, but I just didn’t love the pacing of this one. I would have preferred some more snappy dialogue to move things along a little.

I didn’t feel terribly lost in the series, I mean obviously there are little things between the characters from previous books but overall I wasn’t entirely out of place in this one. It held my interest until the end and I wouldn’t mind reading more in this series but it wouldn’t be a series that I would clear my calendar for. I know a lot of other reviews have enjoyed the earlier books in the series more and I would reserve final judgement upon completing the earlier books for the overall series rating but this one came in at a solid 3 stars for me. Good but not great.