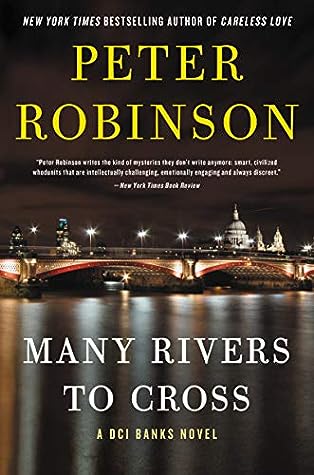 After some debate, I decided to give this one a try and see how it went. I obviously wasn’t going to go back and read 25 books just to get to this one so I had to trust that at least a large chunk of the story would focus on the mystery and being a police procedural, that is indeed what should have happened.

In Eastvale, a young Middle Eastern boy is found dead, his body stuffed in a wheelbarrow on the East Side Estate. Detective Superintendent Banks and his team know they must tread carefully to solve this sensitive case. But tensions rise when they learn that the victim was stabbed somewhere else and dumped. Who is the boy, and where did he come from?

Then, in a decayed area of Eastvale scheduled for redevelopment, a heroin addict is found dead. Was this just another tragic overdose or something darker?

To prevent tensions from reaching a boiling point, Banks must find answers quickly. Yet just when he needs to be his sharpest, the seasoned detective finds himself distracted by a close friend’s increasingly precarious situation. He needs a break—and gets one when he finds a connection to a real estate developer that could be key to finding the truth.

With so many loose ends dangling, there is one thing Banks is sure of—solving the case may come at a terrible cost.(summary from Goodreads).

So let me start by saying that this wasn’t in fact a bad book, but I must admit that I am not sure it was for me. I had high expectations going into this one, especially considering so many people love this series as well as the tried and tested length of the series as a whole. However, I felt completely disconnected from the characters. I think it had more to do with my inability to relate to them rather than the fact that I was picking up this series for the first time. I could be wrong though, I know there are plenty of fans of the series that feel emotionally invested in the characters, but they are also long time fans so maybe you do need to read the other books in the series? I am not entirely sure, but for me I just didn’t feel an emotional connection to anyone nor did I feel invested in anything in this story.

The crime/mystery was just ok for me. It wasn’t anything overly complicated or special, though I do still love a mystery so I was compelled to keep reading for this reason alone. I hate to leave things unfinished especially when it comes to crime etc so for that reason I continued reading until the end but if this book didn’t at least have a decent mystery then I would have given up long ago.

The book definitely has modern relevance when it comes to the crime as well as frequent mentions of Brexit (which as an American I am still confused by) which initially I thought would resonate with me. Lately I’ve been wrapped up in so many historical mysteries that frankly it was nice to return to the modern world in which we live so I did enjoy that aspect of the novel. However, I just don’t know if this is the series for me. I know a lot of people love this series (obviously!) so please don’t let my opinion put you off, but ultimately I ended up giving it 2 stars.

Hardcover, 416 pages
Published September 5th 2019 by Hodder & Stoughton
ISBN 1444787047 (ISBN13: 9781444787047)
Free review copy provided by publisher, Harper Collins, in exchange for an honest review. All opinions are my own and in no way influenced.
Rating: 2 stars
Genre: crime/police procedural, mystery