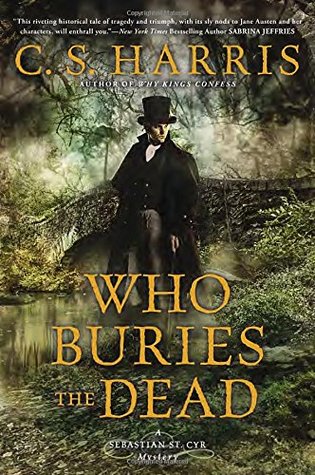 I just couldn’t resist picking up another Sebastian St Cyr mystery. I toyed with the idea of taking a break and reading something else but I just kept coming back to this series and wanted to know what was in store for Sebastian so here we are with yet another review.

I think it’s safe to say that I will easily surpass my Goodreads reading goal this year considering I’ve already finished 10 books in this series before January was even done!

Though I will say, I am tempted to take a break after this one because this was my least favorite in the series thus far and let me tell you why….

London, 1813. The vicious decapitation of Stanley Preston, a wealthy, socially ambitious plantation owner, at Bloody Bridge draws Sebastian St. Cyr, Viscount Devlin, into a macabre and increasingly perilous investigation. The discovery near the body of an aged lead coffin strap bearing the inscription “King Charles, 1648” suggests a link between this killing and the beheading of the deposed seventeenth-century Stuart monarch. Equally troubling, the victim’s kinship to the current Home Secretary draws the notice of Sebastian’s powerful father-in-law, Lord Jarvis, who will exploit any means to pursue his own clandestine ends.

Working in concert with his fiercely independent wife, Hero, Sebastian finds his inquiries taking him from the wretched back alleys of Fish Street Hill to the glittering ballrooms of Mayfair as he amasses a list of suspects who range from an eccentric Chelsea curiosity collector to the brother of an unassuming but brilliantly observant spinster named Jane Austen.

But as one brutal murder follows another, it is the connection between the victims and ruthless former army officer Sinclair, Lord Oliphant, that dramatically raises the stakes. Once, Oliphant nearly destroyed Sebastian in a horrific wartime act of carnage and betrayal. Now the vindictive former colonel might well pose a threat not only to Sebastian but to everything—and everyone—Sebastian holds most dear. (summary from Goodreads)

First of all, I understand why this book focused on something other than the war with the French. I mean, the last 9 books have basically focused almost exclusively on the war with the French and French spies, and while I thought I was ready for something different—this wasn’t what I had in mind. I mean, it makes sense to take a different approach with the West Indies angle and also it makes sense to bring back a long time enemy of Sebastian’s but I just don’t know that it worked in this one.

This one lacked some of this historical background that the others had in spades. Don’t get me wrong, the authors does a great job in general with historical backgrounds and period accuracies, but in this one it just didn’t have the same amount as some of her others. She knows her French history and I was sad that her knowledge wasn’t put to an advantage as much in this one.

I also didn’t care for the death of one of the characters. I won’t spoil it for anyone but it just seemed like that character could have gone one more book at the very least. I appreciate that the author isn’t afraid of killing off characters when necessary but in this case I think it was a little premature. The mystery itself was ok, lots of red herrings and swirling motives for different characters but I didn’t care for all the Jane Austen references—both from her books as well as having Jane be a character in the book. I think the story would have been stronger without all that. I also thought the killer’s motives were a little weak and I would have liked to have seen the reasonings played up a little more in the plot.

While this wasn’t my favorite in the series, it was still a worth while read and diverting as always. I read it very quickly and enjoyed my time in the world of Sebastian and can’t wait to continue reading more mysteries!