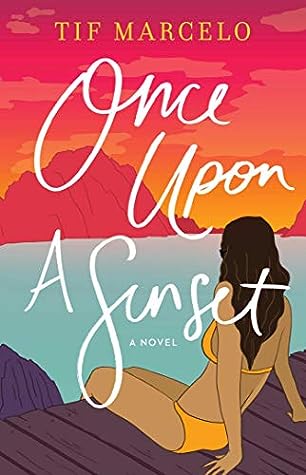 I read Tif Marcelo for the first time last year, The Key to Happily Ever After, and thought it was super fun and a very satisfying read! I was obviously eager to get my hands on her latest release to see if the magic continued going strong!

I was especially eager to ‘travel’ to an exotic location in this one. The author is Pilipino and since this book is set in the Philippines, I thought her culture and experiences would really shine in this book.

I also really liked the idea of a closely guarded family secret that the main character embraces the adventure of those secrets so obviously this was a book I was really really looking forward to for early spring.

Diana Gallagher-Cary is at a tipping point. As a Washington, DC, OB/GYN at a prestigious hospital, she uses her career to distract herself from her grief over her granny’s death and her breakup from her long-term boyfriend after her free-spirited mother moves in with her. But when she makes a medical decision that disparages the hospital, she is forced to go on a short sabbatical.

Never one to wallow, Diana decides to use the break to put order in her life, when her mother, Margo, stumbles upon a box of letters from her grandfather, Antonio Cruz, to her grandmother from the 1940s. The two women always believed that Antonio died in World War II, but the letters reveal otherwise. When they learn that he lived through the war, and that they have surviving relatives in the Philippines, Diana becomes determined to connect with the family that she never knew existed, though Margo refuses to face her history. But Diana pushes on, and heads on a once-in-a-lifetime trip that challenges her identity, family history, and her idea of romantic love that could change her life forever. (summary from Goodreads)

This book is marketed as a mother/daughter self discovery novel with romance. In my opinion, I think there was less romance than I was expecting. I mean I wasn’t disappointed at all by that, but I did feel like it was more mother/daughter/family history/self discovery rather than romance. The romance part played a minor roll for me.

As with her previous novel that I read, I found Marcelo’s writing skills superior and well crafted/developed! I loved how well she writes, the descriptions of the Philippines were captivating and interesting and the family secrets were riveting with little twists along the way. The characters are colorful and vibrant. I loved getting to know each of them and I especially liked Diana. I know a lot of readers really enjoyed the free spirited mother Margo, but for me I connected with Diana more.

I think that Marcelo really captured the complicated relationship between mother and daughter so well and I think that many women will appreciate the complexity of the story and the realness of their dynamic.

While I really loved this read I think the only thing I had hoped for was a little more romance. I get it, the romance wasn’t the focus, but everything I saw highlighted that this was a romance mixed with mother/daughter/family secrets plot, so I was expecting more romance. I didn’t care if the story didn’t have the romance element but the fact that it was marketed as such implied there would be more. That’s obviously not the author’s fault perhaps the publisher was hoping to reach or appeal to a larger audience but either way if you are going into this one thinking it will be full of romance, it is not. But you should still read it all the same because the story is well written and nuanced!

I loved the authenticity of this book, not just with the characters but with the setting. Pick this one up if you love family secrets and the complexity between mothers and daughters!