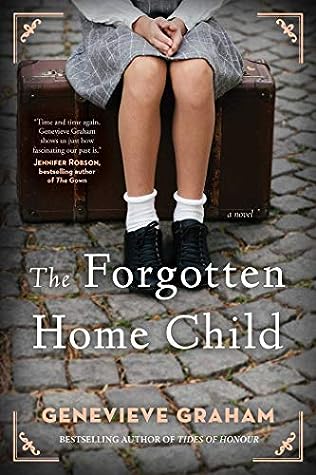 I have been a long time fan of Genevieve Graham and honestly, she hasn’t written a bad book yet in my opinion! She writes with such authority and knowledge on her topics that it’s always an easy yes to read one of her books!

She is a Canadian author and her books are mostly set in Canada which isn’t exactly the first place I think of when I think of historical fiction. The most obvious choices are England or France so whenever I pick up one of her books I know I am going to be reading something totally different when it comes to setting.

Her latest release is less about romance and more about the tragic lives and stories of orphans during a dark time in history and I was thrilled to see where this story would take me!

At ninety-seven years old, Winnifred Ellis knows she doesn’t have much time left, and it is almost a relief to realize that once she is gone, the truth about her shameful past will die with her. But when her great-grandson Jamie, the spitting image of her dear late husband, asks about his family tree, Winnifred can’t lie any longer, even if it means breaking a promise she made so long ago…

Fifteen-year-old Winny has never known a real home. After running away from an abusive stepfather, she falls in with Mary, Jack, and their ragtag group of friends roaming the streets of Liverpool. When the children are caught stealing food, Winny and Mary are left in Dr. Barnardo’s Barkingside Home for Girls, a local home for orphans and forgotten children found in the city’s slums. At Barkingside, Winny learns she will soon join other boys and girls in a faraway place called Canada, where families and better lives await them.

But Winny’s hopes are dashed when she is separated from her friends and sent to live with a family that has no use for another daughter. Instead, they have paid for an indentured servant to work on their farm. Faced with this harsh new reality, Winny clings to the belief that she will someday find her friends again.

Inspired by true events, The Forgotten Home Child is a moving and heartbreaking novel about place, belonging, and family—the one we make for ourselves and its enduring power to draw us home.

While this is a fictional story, it is based on actual historical events, children from England being shipped to (in this case) Canada where they were promised better lives but the reality of that promise was far from ‘better’. This was something practiced more often than not, during times of poverty and uncertainty. My own grandfather was sent with his brother to live in an orphanage in Oregon during the Depression because their mother couldn’t afford to keep them when she had 3 other children to care for so she sent the 2 youngest to live in an orphanage in one of our larger cities and he often talked a lot about the conditions and lies told by orphanages. So a story like this really caught my eye because it had a personal connection for me.

Graham is such a great romance writer and I was a little unsure of how this book would play out because the topic was so much more weighty but I was incredibly satisfied with this story and couldn’t have been happier with how it was told. Yes it was sad at times and you might want to have tissues handy, but in the end, it was an all around well written touching novel.

The amount of research Graham does with her novels is always amazing but this book really highlighted her knowledge and research. I just love how she keeps it Canada specific and I can only imagine how much time she spent researching the orphan stories and history. I can’t emphasize that enough in this book! I don’t normally read the author notes at the end of a book unless the content really appeals to me and in this case I recommend reading the author notes. It was a very interesting read.

This story is told in two time periods and I thought the transition between the two periods was fairly seamless and connected nicely together. The story was touching on so many levels but not all of it was cupcakes and rainbows, readers should be aware that the author doesn’t shy away from abuse that happened to these children. It was a novel that wasn’t always easy to read because of that, but in the end I felt satisfied with it even though I had to take a breather.

Kindle Edition, 384 pages
Published March 3rd 2020 by Simon & Schuster
ASIN B07TD6G83V
Free review copy provided by publisher, Simon & Schuster, in exchange for an honest review. All opinions are my own and in no way influenced.
Rating: 4.5 stars
Genre: historical fiction