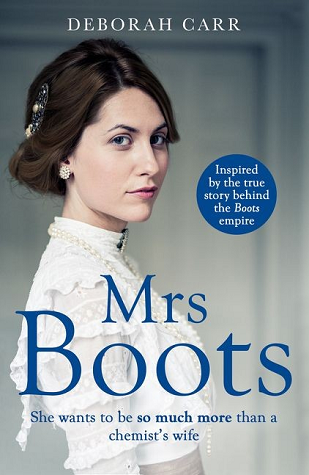 Deborah Carr is an author that only recently popped onto my radar with her book The Poppy Field. When her latest novel came up for review I found myself eager to read it as I hadn’t gotten around to The Poppy Field yet.

I was also intrigued by the fact that this book is told mostly through letters and I love epistolary novels so this book was a no brainer yes for me.

The other thing that drew me to this book was the fact that I knew nothing about this apparently well known women, Florence Boot. Before this book I hadn’t heard of her or the well known—but clearly not to me—Boots chemists. I love learning about new things so I was open to finding out more via this historical fiction novel!

On the beautiful island of Jersey, Florence Rowe lives a quiet life working in her father’s bookshop. Life for the Rowe family is good, but Florence can’t help yearning for more…

When Jesse Boot, the successful owner of Boots the chemist, arrives on the island, Florence is immediately captivated by his tales of life in a busy, bustling city on the mainland. For the first time ever, Florence imagines a life away from the constraints of Jersey society, of being someone more than just a shopgirl.

Until her parents reveal the shocking news they will refuse any marriage proposal from Mr Boot. Can Florence find a way to be with the man she loves and make a new life for herself? (summary from Goodreads)

So the first thing I noticed about this novel was that it would be unlikely that I would discover anything more than minimal info about the Boots empire that I already know nothing about. If you are like me and you know nothing about the Boots empire, don’t look to this book to fill in the gaps beyond the absolute basics. While that was slightly a disappointment for me, the romance between Jesse and Florence more than made up for that issue.

Plus this is going to be a series so perhaps we will know more later on in the future books about the Boots empire, but either way even if there was bits about that empire missing in this book, as I said the romance was fulfilling and made up for that bit for me. Both of the characters together were refreshing and a pleasure to read. I adored Jesse Boot and thought he was easy to love and perfect romantic interest for Florence. I was absolutely invested in their relationship and romance.

If you love historical fiction and romance this is going to be a new series you want on your radar. The only thing that I struggled with in this one was the occasional repetitiveness. For example, all the anticipation of Jesse’s letters and the disapproval of Florence’s mother in regards to their match. Over all it wasn’t horribly distracting or irritating, but toward the end I was like ok I got it. I am looking forward to continuing this series and seeing if some of my lingering plot questions will be addressed in the future books but to see what direction these lovely characters head into next!

Kindle Edition
Published February 6th 2020 by One More Chapter
ASIN B07S8SD6JK
Free review copy provided by publisher, One More Chapter, in exchange for an honest review. All opinions are my own and in no way influenced.
Rating: 4 stars
Genre: historical fiction, romance