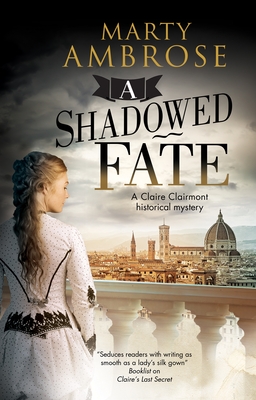 I’ve been looking forward to this one for a while. I absolutely love the cover and I thought the premise sounded fun and different.

I knew it was part of a series (it’s the second book) but I figured that it could be read as a standalone since most of the time, authors of series usually do a great job filling new readers in on things that happened in the previous book.

The other thing I liked about this one was that it was on the shorter side (just under 200 pages) so more like a novella length so I figured it would be a very quick read for me.

A shocking revelation from an old friend leads Claire Clairmont on a dangerous quest in this second in a fascinating historical trilogy based on the ‘summer of 1816’ Byron/Shelley group.

1873, Florence. Claire Clairmont, the last survivor of the ‘haunted summer of 1816’ Byron/Shelley circle, is reeling from the series of events triggered by the arrival of Michael Rosetti two weeks before, which culminated in a brutal murder and a shocking revelation from her old friend, Edward Trewlany.

Stunned by her betrayal at the hands of those closest to her, Claire determines to travel to the convent at Bagnacavallo near Ravenna to learn the true fate of Allegra, her daughter by Lord Byron. But the valuable Cades sketch given to her by Rosetti is stolen, and Claire soon finds herself shadowed at every turn and in increasing danger as she embarks on her quest. Is the theft linked to Allegra, and can Claire uncover what really happened in Ravenna so many years ago? (summary from Goodreads)

The first thing that I noticed right away was this book was NOT meant to be read as a standalone. There appeared to be a lot of plot points in the book that were built on the first book so I think I should have taken the time to go back and read the first book in the series before this one. The other thing that I noticed was this some people categorized this as a mystery. The title on Goodreads shows it as the Claire Clairmont series and on Amazon it’s call The Lord Byron Mystery series so that could be confusing. I felt that it had some mystery elements, but I didn’t consider it a historical mystery. I would say it’s more historical fiction rather than mystery.

Both of the books in this series are under 200 pages and I found myself wondering why they wouldn’t have been combined into a single full length book rather than making them more like short stories or novellas? In some ways I think it would have made the book stronger to have a single longer novel.

Other than those couple of things, the story was, overall, well written and researched. The author clearly has a love for her characters as well as the time period and her love showed in this book. I enjoyed the characters and the story but I think I would have loved it more had I read the previous book. Claire was a great feisty character and I loved getting to know her, though in this book she is older and I would have liked to have seen her character development from book one through now.

It was really hard for me to rate this book, on one hand I felt really handicapped having not read the first book, but on the other hand the writing was great and so was the historical research and I loved the main character Claire, in the end I went with 3 stars. It was good but definitely need to read the first book.