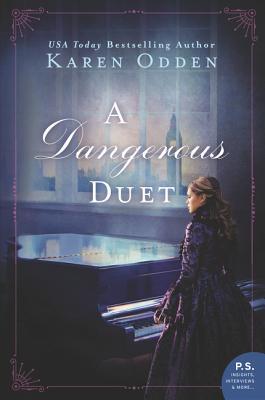 Karen Odden is an author I have had on my radar for a while but I just never seem to pick up any of her books.

As many of you know, I never met a historical mystery that I didn’t like—ok well maybe there were a couple, but by and large, I love historical mysteries and I love discovering new heroines and heroes to admire.

This dazzling new Victorian mystery from USA Today bestselling author Karen Odden introduces readers to Nell Hallam, a determined young pianist who stumbles upon the operations of a notorious—and deadly—crime ring while illicitly working as the piano player in a Soho music hall. Perfect for readers of Tasha Alexander, Anne Perry, and Deanna Raybourn.

Nineteen-year-old Nell Hallam lives in a modest corner of Mayfair with her brother Matthew, an inspector at Scotland Yard. An exceptionally talented pianist, she aspires to attend the Royal Academy; but with tuition beyond their means, Nell sets out to earn the money herself—by playing piano in a popular Soho music hall. And the fact that she will have to disguise herself as a man and slip out at night to do it doesn’t deter her.

Spending evenings at the Octavian is like entering an alternate world, one of lively energy, fascinating performers, raucous patrons—and dark secrets. And when Nell stumbles upon the operations of an infamous crime ring working in the shadows of the music hall, she is drawn into a conspiracy that stretches the length of London. To further complicate matters, she has begun to fall for the hall owner’s charismatic son, Jack, who has secrets of his own.

The more Nell becomes a part of the Octavian’s world, the more she risks the relationships with the people she loves. And when another performer is left for dead in an alley as a warning, she realizes her future could be in jeopardy in more ways than one. (summary from Good reads)

It wasn’t that I didn’t like this book. I actually found it pretty fun and I liked the characters just fine but I felt like something was lacking or missing from the plot. I thought about this for a couple of days and ultimately decided that it wasn’t any one specific thing but rather a collection of small things that I think could have been elaborated one. I think the most obvious for me was Nell. While I enjoyed her and found her likable, there were times when I felt like she was a little bland. I wasn’t sure if she was meant to be a wealthy or middle class girl or if she was just meant to be somewhere in the middle. Her social status wasn’t necessarily the focus of the story but there was certainly a question in my mind as to the believability of her romance with Jack and how she was able to get away with little to no social confines beyond her disguise at the music gall.

Also when the book ended I felt like her story felt unfinished. At the time I thought it would carry over into the next book but I can tell you that isn’t necessarily the case. When the book came to an end it felt abrupt and like it left her character in the wind.

I had similar questions about Jack and his character in the story that I won’t go too much into detail here, but again they were similar to how I felt about Nell. I was interested in knowing more about Nell’s brother Matthew who was introduced but didn’t really get much attention in the story. Though I can say that his story is in the next book.

The other small thing was the mystery itself. I liked the twists and turns and some of the red herrings but I also found that the mystery was just ok rather than exciting. I will say that the second book features quite an exciting and sensation mystery!

So where did that leave me with this one? Like I said, it wasn’t bad, it kept me interested and reading, but it didn’t wow me. Now the second book did wow me and I found it exciting and fun, but this on was just ok for me. Would I read more by this author? Absolutely! There have been plenty of ‘ok’ historical mysteries that I’ve read and gone on to love other books in the series. I think this author has strong writing skills and I look forward to reading more by the author in the future!